For corporations, sorry now seems to be the easiest word

Facebook, Apple and Uber have done the mea culpa – but an apology can go awry 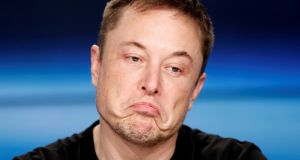 Hardly a week passes now without one major company or another expressing contrition for its sins. Facebook is sorry for lax privacy controls. Apple is sorry for slowing iPhones. Uber is sorry for all kinds of mishaps – so much so that it is spending $500 million on a global apology tour. Do corporate apologies work? What makes for a good apology? Can apologies – or the lack of them – impact share prices? Might executives have too much faith in the power of a mea culpa? Certainly, some corporate apologies are more successful than others. PR textbooks often refer to former Johnson & Johnson (J&J) chief executive James Burke, who delivered what Harvard Business Review (HBR) described as the “virtually perfect public apology” in 1982 after poisoned Tylenol capsules resulted in the deaths of seven people.

“He promptly acknowledged the problem,” said HBR. “He accepted responsibility. He expressed concern. And he put his money where his mouth was.”

The scandal could have killed the Tylenol brand; instead, both J&J and the brand emerged “with their reputations enhanced”.

Earlier, this year, Starbucks chief executive Kevin Johnson was widely lauded after apologising unreservedly following an incident in which two African-Americans were wrongly arrested at a Starbucks store. Instead of blaming the store manager, Johnson accepted full responsibility (“I own it”) and promptly closed 8,000 stores for anti-racism training.

Other apologies – particularly the “sorry I’m not sorry” variety – are less successful. There was uproar last year after footage emerged of United Airlines staff forcibly dragging a passenger off an overbooked plane. Chief executive Oscar Munoz’s immediate response was to say staff had “followed established procedures” and “politely asked” the “disruptive and belligerent” passenger to leave the plane. The resulting outrage prompted a second, and then a third, less-qualified apology from Munoz.

BP chief executive Tony Hayward apologised for the “massive disruption” caused by the Deepwater Horizon oil spill in 2010. “I’d like my life back,” he added, not anticipating this appeared insensitive to the families of the 11 workers who lost their lives in the rig blast.

Toyota chief executive Akio Toyoda apologised and tried to reassure investors after the discovery of quality-control issues, only to be seen driving away in an Audi. Goldman Sachs chief Lloyd Blankfein was pilloried for uttering a vague apology over the bank’s part in the global financial crisis in 2009.

And former Anglo Irish Bank chairman Seán FitzPatrick wouldn’t even go that far, telling Marian Finucane in October 2008 that he “can’t say sorry with any degree of sincerity”.

More recently, Ryanair refused to apologise for changing its rules on baggage fees, saying their flights “are full of people who swear frequently they’ll never fly with us again”. If some customers “want to choose higher fares and less punctual airlines, then so be it. Someone else will take their seat.”

Do apologies matter to investors? No doubt there have been cases where share prices have been positively or negatively impacted. Earlier this year, Tesla chief executive Elon Musk got into hot water after criticising an analyst for asking “boring, bonehead questions”.

In August, Musk apologised, much to the relief of concerned investors. Tesla’s value soared by almost $5 billion following Musk’s about-turn, making it “maybe the most valuable apology of all time”, said KeyBanc Capital Markets.

Almost $1 billion was wiped off the value of United Airlines shares following the social media backlash to Munoz’s comments. Tony Hayward’s fumbled apology did little to help BP’s tanking share price. Being photographed aboard his yacht further inflamed the situation, prompting then White House chief of staff Rahm Emanuel to quip: “We can all conclude that Tony Hayward is not going to have a second career in PR consulting.”

Immediate market reaction aside, ineffective apologies can damage companies in other respects. An insincere or half-hearted apology may suggest managerial complacency and a lack of desire to make necessary changes to how their companies are run. They can annoy customers.

And, as technology companies such as Facebook and Google have discovered, they can annoy regulators and policymakers. Companies “need to care about political risk”, says Washington-based crisis management expert Eric Dezenhall of Dezenhall Resources, “about there being so much political outrage that there is political pressure to punish them”.

So what makes a good apology? It’s not just what you say but how you say it, according to a 2015 study, Saving Face. It found that sincere apologies result in less damage to a share price. In contrast, it’s not a good idea to behave like Netflix chief executive Reed Hastings, who smiled his way through a video apology posted online in 2011. A stock price is more likely to be punished if an executive smiles while apologising, the study found. That aside, the standard advice from PR advisers is to emphasise the four Rs – recognition, responsibility, regret, and reparation. That means taking responsibility rather than making excuses and, rather than uttering vague words, be specific. Starbucks’ aforementioned apology satisfies these criteria; United Airlines, not so much.

Time is also of the essence; the potential for problems to quickly spiral on social media mean companies are being increasingly urged to say sorry even before they have all the facts. Companies seem to be taking this advice. Research shows the number of corporate apologies has exploded since the late 1990s. Apologies can seem like a no-brainer; medical research shows that doctors’ apologies for medical errors reduce the odds of being sued and substantially decreases average payouts.

Not everyone is convinced, however. Over the years, Eric Dezenhall has repeatedly questioned the PR industry’s “evangelical belief in the mea culpa”, dismissing “loosey-goosey” concepts such as reputation. For all the emphasis on apologising and contrition, there is “very weak data to show these cliches bear out in reality”, he argues.

Dezenhall’s argument that people expect apologies to accomplish more than they do is echoed by recent data from Dallas-based social analytics firm TickerTags, which found sentiment on social media towards Facebook, Uber and banking giant Wells Fargo has remained negative in recent months despite each company running multiple apology ads. Results can be mixed, according to a 2017 study, Do Investors See Value in Ethically Sound CEO Apologies? Unlike the Saving Face study, it found apologies that seem ethical and sincere “are not associated with a significantly positive response by investors”. Markets reacted positively towards apologies that conveyed acceptance and personal responsibility, but expressions of empathy actually hurt stock prices. Why?

The researchers, who had expected ethical apologies to be good for share prices, offered a number of potential explanations. Investors may view expressions of empathy as a sign of weakness. They may worry the CEO is “too preoccupied with stakeholder feelings and concerns, and not sufficiently focused on meeting profit goals”. Alternatively, given the “virtual tsunami of CEO apologies, investors may have become cynical, lumping all CEO apologies together and dismissing the lot as mere exercises in public relations”. Whatever the explanation, companies “need to think more strategically about the elements of corporate apologies”, and be wary of PR advice stressing the value of a touchy-feely approach. Refusing to say sorry isn’t good, but the value of a corporate apology, it seems, may be a touch overstated.