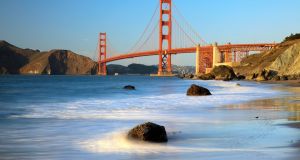 J-1 workers may be due a tax refund. Photograph: Getty

If you’re one of 7,000 Irish students who visited the US on a J-1 visa over the last year, then you must file a tax return by today, April 15th, or risk potentially jeopardising a future visa application. And the bad news is, you shouldn’t expect a generous refund to compensate your efforts.

Every J-1 visa holder in the US must file a tax return at the end of the tax year. It’s the law and also one of the conditions of the J-1 visa, but many Irish students may be unaware of this clause.

“Failure to comply with these tax obligations may affect future visa applications. You never know what future opportunities may arise for you in the US. That’s why it is so important to have your tax in order if you like the idea of working in the US in future,” says Eileen Devereux of tax specialist Sprintax, said.

In the past, students filing tax returns often received bumper refunds once they returned home. However, US tax law changed last year, on the back of the Tax Cuts and Jobs Act 2017, substantially cutting what an Irish student worker might have been expected to claim back.

Prvoiusly, non-resident workers were entitled to a personal exemption of $4,050, which meant for example, if you were working in San Francisco on a J-1 visa in 2017, you could have earned up to $4,050 tax free.

However, as of January 1st 2018 (and up to 2025) the personal exemption was abolished, which has increased the tax burden for non-residents.

This means that while you might still get a refund, it won’t be as large as earlier J-1 travellers.

To claim this refund, you must file both your State and Federal tax returns. You can either do this yourself, once you have your W2, which should have been sent out to you in January, or pay for your forms to be filed a via a service such as Sprintax, which charges a fee of about $66.

You may also be in line for a refund if you travelled to the US before the new tax laws were introduced.

“If you worked in the US prior to 2018 and haven’t yet filed a tax return, you can still claim a refund of any overpaid US tax for the last four years. So, anyone who took part in the programme in the years 2016 - 2018 and failed to claim a tax refund should still do so for two reasons - a) they can get an unexpected windfall and b) they can be US tax compliant,” Ms Devereux advised.