Is it bear market time for investors? Six factors to consider 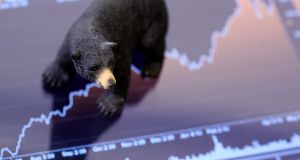 February’s market correction was a decidedly rapid affair, with the S&P 500 enduring its fastest-ever double-digit decline from an all-time high before enjoying a strong rebound.

Was the recent action no more than a short-term corrective episode that paves the way for higher prices? Or is this finally bear market time? Here are six factors that investors should consider.

Even bulls agree stocks are expensive. Goldman Sachs, which expects stocks to overcome recent weakness and to post gains in 2018, recently cautioned the S&P 500 “has been cheaper at least 90 per cent of the time historically”. Similarly, while most professional investors expect the bull market to survive into 2019, recent Merrill Lynch monthly fund manager surveys have found a record number believe stocks to be overvalued.

Concern often focuses on the index’s elevated cyclically-adjusted price-earnings ratio (Cape), which has only even been exceeded on one occasion (at the height of technology bubble in the late 1990s). Bulls counter that Cape is an imperfect indicator that exaggerates the true picture. But even if that is true, a variety of other valuation metrics confirm stocks are more expensive than they have been at the vast majority of previous major market top.

However, that has been the case since at least 2014. Stocks can stay expensive for any number of reasons (bulls point to low interest rates and strong earnings growth as justifying current valuations). While the most expensive stock markets in history – in 1929, 2000 and 2007 – were indeed followed by bear markets, Ritholtz Wealth Management’s Ben Carlson points out bear markets can also occur following periods of extremely low valuations.

The point is, heady valuations make stocks vulnerable but they are rarely sufficient to trigger a bear market on their own – another catalyst is required.

A variety of factors – extreme valuations, aggressive Federal Reserve tightening, commodity price spikes – can catalyse bear markets (that is, a protracted decline of at least 20 per cent). However, the usual trigger is recession, which has accompanied eight of the 10 last US bear markets, according to JP Morgan’s quarterly Guide to the Markets.

The risks of a recession in the next 18 to 24 months are rising, according to Ray Dalio of Bridgewater, the world’s largest hedge fund. The recent market correction was justified, said Dalio, who says the recent “spurts” in growth and job numbers indicates the business cycle is “a bit ahead of where I thought it was”, adding that central banks now face a tricky balancing act. There is concern that fiscal stimulus, normally reserved for times of economic weakness, could overheat the US economy and that this will necessitate acceleration in the Federal Reserve’s rate-hiking cycle. Nevertheless, recession risk remains low; the probability of a recession in the next two years is just 17 per cent, according to Goldman Sachs’ model.

Until February’s market upheaval, volatility was at historically low levels. That suggests markets have not yet peaked – bull markets tend to have multiple sell-offs before finally peaking, Nomura analysts noted recently, with volatility rising in the latter stages of the economic cycle. For example, the S&P 500 soared higher at the tail end of the technology bubble in 1999 but it also suffered six separate declines of at least 5 per cent that year.

Volatility, as measured by the Vix index, was more than twice as high as it was in 2017. Things were similar in the final stages of the 2003-07 bull market; although stocks were near all-time highs in December of 2007, they suffered a number of nerve-racking declines as the year progressed. Volatility tends to rise as markets assess the progress of the business cycle and process the likelihood of different fundamental scenarios. Current concerns regarding the normalisation of interest rates are unlikely to disappear, says JP Morgan, which expects the current market cycle to “end through an overheated economy” requiring restrictive rate policies, but “we do not think risky markets should peak this early in that endgame process”.

The aforementioned points regarding escalating volatility tend to be reflected in market breadth statistics. Markets tend to top out over time, according to research by award-winning technical analyst Paul Desmond. As bull markets age and volatility increases, fewer stocks participate in the rebounds, but widespread weakness in individual stocks can be missed as indices keep hitting new highs owing to the efforts of a number of high-flying large-capitalisation stocks. As a result, few stocks tend to be making new highs at the eventual market peak – this was the case at the major market tops in 2000 and 2007 and again during 2015’s drawn-out market correction. 2018 does not resemble such episodes in that breadth statistics have been very healthy. At January’s peak, more than 80 per cent of stocks were above their 50- and 200-day moving averages, with almost all S&P 500 sectors participating in the advance.

Bull markets are born on pessimism, grown on scepticism, mature on optimism, and die on euphoria, as contrarian investor John Templeton once said. Euphoria was notably absent for most of 2017. Despite big returns, surveys of ordinary and institutional investors indicated investors remained cautious. That changed near the end of the year, however, with a multitude of indicators – investor surveys, reduced cash levels, individuals ploughing into stocks – indicating irrational exuberance was taking hold.

“What we saw in January was sort of the psychological peak of the entire bull market”, says the Leuthold Group’s Doug Ramsey, who has lately turned more cautious on stocks. “The sentiment peak usually occurs a number of months, sometimes up to a year, in advance of a market peak”, says Ramsey. In other words, stocks should recover and make new highs but January’s sentiment surge means we are likely in the latter stages of this long bull market.

Merrill Lynch’s widely-followed bull and bear indicator, which uses a variety of technical and fundamental factors to assess whether markets are gripped by fear or greed, triggered a sell signal on January 30th. In the past, sell signals have been followed by stocks enduring an average drawdown of 12 per cent over three months.

Unlike Merrill’s indicator, Citi’s checklist is not designed to tell investors if a short-term correction is imminent; rather, it tells investors what to do when that correction occurs. In other words, investors should have been buying into the recent weakness; a bear market remains unlikely.