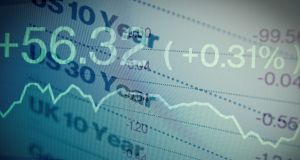 CFDs allow investors to speculate - with leverage - on the short-term price movements of an asset, such as shares or oil prices.

The European securities regulator has imposed strict restrictions on the use of leverage in contracts for difference (CFDs) on the back of concerns that retail investors across Europe were sufferering “significant losses” due to the complexity of the products.

CFDs are most commonly known perhaps, as being the tool used by Sean Quinn to build up a clandestine 28 per cent stake in Anglo Irish Bank between 2006 and 2008, and allow investors to speculate - with leverage - on the short-term price movements of an asset, such as shares or oil prices. They tend to be highly leveraged which means that the gains can exceed the original investment - but so too can the losses.

ESMA, the European Securities and Markets Authority, said on Tuesday that it will impose a restriction on the marketing, distribution or sale of CFDs to retail investors. This restriction consists of: leverage limits on opening positions; a margin close out rule on a per account basis; a negative balance protection on a per account basis; preventing the use of incentives by a CFD provider; and a firm specific risk warning delivered in a standardised way. The changes to CFDs means that investors will no longer be able to lose more money than they put in.

Steven Maijoor, chair of EMSA, said the new measures will “ guarantee greater investor protection” across the EU by ensuring a common minimum level of protection for retail investors.

“The new measures on CFDs will for the first time ensure that investors cannot lose more money than they put in, restrict the use of leverage and incentives, and provide risk warning for investors. For binary options, the prohibition we are announcing is needed to protect investors due to the products’ characteristics,” he said.

Mr Maijoor said that investors have been attracted to such products, given the promise of high returns, easy-to-trade platforms and low interest rates, but have failed to understand the “inherent complexity of the products and their excessive leverage” which has resulted in significant losses for retail investors.

Industry has lobbied against the changes however. Ahead of today’s announcement, UK online trader IG had canvassed opinion on the mooted changes, garnering almost 15,000 responses - 98.1 per cent of which were against the changes. Others however have welcomed the move.

Dutch broker DeGiro, which offers trading services to Irish based customers, says it is “quite pleased” to see the changes taking place.

“At DeGiro we do not encourage investors to trade on highly leveraged and speculative products. We welcome the conversation that has started in recent months as it is important for investors, particularly new investors, to be fully aware of all risks when trading such products,” a spokesman for the broker said.

As DeGiro offers only unleveraged CFDs to its clients, its CFD offering won’t be affected by the change.

The changes mean that the leverage limits on the opening of a position by a retail client have been slashed by as much as from 30:1 to 2:1. These vary according to the volatility of the underlying- for example, 30:1 for major currency pairs; · 20:1 for non-major currency pairs, gold and major indices; and 2:1 for cryptocurrencies. The changes will also standardise the percentage of margin (at 50% of minimum required margin) at which providers are required to close out one or more retail client’s open CFDs; while there will also be restrictions on the incentives offered to trade CFDs.

Research on CFD trading across different EU jurisdictions shows that 74-89 per cent of retail accounts typically lose money on their investments, with average losses per client ranging from € 1,600 to € 29,000. Research from the Central Bank in 2015 found that 75 per cent of retail CFD clients who invested in CFDs during 2013 and 2014 made a loss, of which the average loss was € 6,900, while a follow-up study in 2016 found that 74 per cent of Irish retail clients lost money, with an average loss of € 2,700. Last March, the Irish regulator launched a consultation into the use of CFDs in Ireland, where it proposed prohibiting the sale or distribution of CFDs to retail clients in and from Ireland.

In addition to the changes to CFDs, ESMA has also prohibited the marketing, distribution or sale of binary options, which involve placing a bet on whether the value of a financial asset will rise or fall in a fixed time, to retail investors.