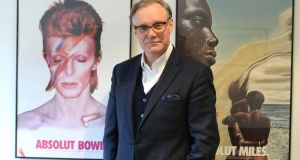 Neal Davies has a theory about why he is fond of Lidl, a recent big client win for the advertising agency BBDO Dublin, of which he is chief executive. It’s the retailer’s “underdog mentality”, something he loves in people and brands alike, and which he shares. “I’m a Middlesbrough fan. How can I not have an underdog mentality, right?”

He arrived at the creative agency last autumn after 18 years in New York, though, as his football allegiance suggests, he grew up in the northeast of England, in Stockton-on-Tees, where, into “all that sort of jumpers-for-goalposts thing” and a family life that was “loving and fun and full of storytelling”, a vicious politics intruded.

Becoming a young adult just as the region was “waylaid in the most awful way” by prime minister Margaret Thatcher’s government meant the feeling of being “on the receiving end of something” was hard to ignore.

“It was very difficult not to be angry, not to be political, and just accept it,” he says. He didn’t realise how much it had affected him until he watched Billy Elliott, some of which was shot near his home, on its release in 1999 in a cinema in New York. “And that scene where you first see the mass ranks of the riot police and the Clash’s London Calling is playing, and it’s like visceral, and I actually . . . I kind of cried. It suddenly struck me how much turmoil there was,” he says. “The anger just came back and hit me.”

As a “northern fundamentalist”, he didn’t look too far south when it came to university, studying politics and history at the University of Hull and becoming chairman of its Labour club in his first term.

Later, when he was president of the Hull University Union, his involvement in the Friends of John McCarthy group – both Beirut hostage McCarthy and his then girlfriend Jill Morrell were Hull graduates – brought him, alongside Morrell, to the door of 10 Downing Street, where they became the last people to present a petition to Thatcher.

Then he remembers something else. In Hull, they had been given Friends of John McCarthy T-shirts. “And they were designed by a London ad agency called Bartle Bogle Hegarty. That was the first advertising agency that I thought, ‘Oh, I’m interested in what they do’. That was the first time I thought, ‘Ah, advertising’. Never thought it was what a working-class lad from the northeast would end up doing.”

His path into the industry came via a marketing job at Kodak, while his New York CV includes being a founding partner in consultancy Naked Communications, a period running the Absolut Vodka account for agency TBWA, and a spell leading Effie Worldwide, a non-profit that awards ads proven to have worked.

He had gone to America with his wife Lisa when they were 30. “We just thought ‘we’ll see what happens’,” he says. Their first visas flew by so fast, they applied for green cards and, after their twins were born, they became citizens. “We were quite set to stay.”

But in 2016, thinking it was a good time to move his pre-teen girls, they changed their minds. Not wanting to be “comparing and contrasting” two big cities, he asked a headhunter if there was anything “that’s not London”. Luckily, “a very interesting thing” had just come in: chief executive of what was then Irish International BBDO. He happily traded his Manhattan commute for the walk into work from Rathmines to Sandymount, where he can see how far the tide is out each day.

What does he think about what’s happened in the US since?

“We came here last June so the girls could visit their school and meet their head teacher and we could do a bit of househunting. We finished the day and we were in the Milano on Baggot Street and the kids were just chomping into their pizza, and we have wine, and we’re just chatting. ‘Anything you forgot to ask the head teacher?’ And the youngest said, ‘Oh yeah, we meant to ask how often they do their lockdown drills.’ And that realisation that your kids have been trained to hide in a cupboard and be quiet, since the age of four, it just hits you in the chest.”

Good clients? (They include Diageo, Mars and the Road Safety Authority. )

“Great clients,” he says. “It’s not like something has been ruined and I need to rebuild it. It’s a case of here’s a thing of beauty, protect what is good about it, nurture it and see if you can grow it as well.”

And notwithstanding October’s rebranding of the agency to BBDO Dublin, led by his predecessor Ian Young (now executive chairman), not much reinvention has been required.

Davies says he is “fascinated” by change management, having worked through a not-so-distant period when “the behemoths of the advertising world, whether it was McCann or even BBDO, were resistant to change” because their business model had existed for so long and they didn’t see why it should budge.

“Then you saw that phase evolve into people embracing change, but not actually changing – talking about changing. It occurred to me that it wasn’t because of a lack of intellect. There are plenty of smart people in the advertising world.”

Instead, it was the “locked-in muscle memory” that was preventing creative agencies from shaking off unhelpful tendencies, such as treating accounts like baton-passing “relay races”, rather than collaborations.

“If you want to be effective, then you need to know what success looks like. You would be surprised how few times that is asked,” he says, laughing. “People just say ‘we want to advertise’, and it’s, ‘Oh, okay, we’ll make you an ad’.”

He likes advertising “not because I like pretty pictures, but because I like problem-solving”. Strangely enough, some important – though not always pretty – pictures created by the agency for the Health Service Executive’s “Quit” campaign have ended up back in New York, reused by a state tobacco control unit.

The original HSE ad featured a cast of real-life ex-smokers lip-syncing to I Will Survive, before the music fades, the tone changes, and a man with a surgical scar flatly recites, “Do you think I’d lay down and die?” into a mirror.

Even though the ad is very Dublin, the New York version, which Davies proudly shows me, only changes the helpline information. “It’s nice to know that, over the Christmas period and early part of the new year, the good people of New York have been seeing a little bit of Dublin.”

I ask him about humour in advertising, as one of the agency’s most quoted works in recent years (though before his time) is the hilarious “two weeks in Torremolinos, it’s gonna be tropic” plumber from an EBS “appointments to suit you” campaign.

“There were T-shirts printed with all that stuff on it,” he marvels. One of the agency’s newest ads, for Flahavan’s, also uses humour because it draws attention to a relatively low-interest category (porridge) and “gets it on the agenda”.

One of BBDO Dublin’s newest clients is the Referendum Commission, for which it is tasked with promoting engagement and turnout in May’s vote on the removal of the Eighth Amendment.

On social media, the suggestion is afoot that some men won’t vote because they ironically think abortion is nothing to do with them. Could this be a factor in the turnout?

“You have to be aware of the fact that some people are saying that. Some people, equally, will be thinking, ‘It’s easier if I don’t vote, I don’t want to have that conversation with my parents or my friends, it’s probably better if I stay out of it’.

“That is almost like an active apathy that we’re going to have to overcome.”

The other campaign that was keeping BBDO Dublin busy last month – “from one end of the scale to the other” – was the launch of Diageo’s Rockshore. Indeed, on the day we meet in early March the offices are rather quieter than a workforce of 96 would suggest because “everybody is out in the west” shooting a road-trip-style ad for the new lager.

With the shoot postponed thanks to the Beast from the East, he had been “panicking” about the weather all week, but he’s been assured by pictorial evidence that the team have been blessed with “almost perfect light” to film in. It is an exciting time for advertising, with some old certainties ceasing to be. Television, once the de facto “hero” medium of brand campaigns, is increasingly obliged to concede that lead to digital possibilities.

He picks up his phone. “In a way, we are in a very safe space where we have gone from TV screens to these things,” he says. “They’re still screens. We still think visually for what will go on a screen. We may not even have screens in five years’ time. ‘You want me to watch ads on my hand?’ Who knows where we’re going to end up.”

Does his time at Kodak seem like another era now?

“It was very strange back then,” he says. He was part of the team that launched Kodak’s first digital camera in the early 1990s – at Wimbledon, because “digital photography would only ever be used by people [sports photographers] who needed to wire an image down a telephone line”. The quality was poor.

He recalls how Kodak concentrated its investment on “tweaks” to its original light-sensitive photo chemistry.

“How do you get less silver halide in a piece of film and make it cheaper to produce? You take a crystal of silver and you flatten it out and it covers a larger space.”

It feels like this is a mistake a lot of industries make, trying to make a dying process more efficient? “Exactly,” he says. “But when I left Kodak in 1997, I didn’t think I was leaving a sinking ship.”

A model Kodak van, found by a colleague in a shop in Dún Laoghaire, rests among the personal and professional paraphernalia that adorns his office. A copy of a 1998 Guardian letters page, bearing his jesting letter about the quality of pies at football grounds, has been framed and put on the wall, not far from a black-and-white portrait of musician Elvis Costello given to him by the photographer. In the corner, stands a Rickenbacker 330 guitar painted in a Roy Liechtenstein pop-art style, a copy of one Paul Weller plays.

He has settled in. He likes the “beautiful balance” of being somewhere where familiar cultural touchstones co-exist alongside things that are “new and different and surprising”. His parents still live in Stockton-on-Tees, 40 minutes from Newcastle airport, “an hour’s flight away”.

I ask him about the economy there now, saying the perception is that the northeast is vulnerable to Brexit-related job losses.

“I would imagine,” says Davies. Brexit was “probably the wrong battle” for people in the old industrial heartlands to pick. But watching from afar, it seemed to him that the Leave campaign’s notorious “£350 million a week” bus messages, though they “may well have been a very large lie”, were also a “brilliant piece of communication” that the Remain side failed to match.

“I don’t know what to do about Britain,” he says. “And I bet I’m not the first person in Ireland to say that.”