Irish ‘accidental Americans’ could be subject to US tax bills 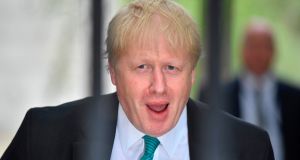 One of the most famous “accidental Americans” is UK foreign secretary Boris Johnson. Born in New York, he was required to pay tax on the profits of a sale of a UK property to the IRS some years ago – even though no such tax was liable under the UK regime.

Thousands of Irish people may be hit with US tax bills simply because they inherited US citizenship but have no economic links to the country.

The situation arises because of the way the US operates its tax system on the basis of citizenship rather than residency. This means that the US taxes its citizens on worldwide income even when they live abroad.

It is the one of the only developed nations to do so, and it has become more of an issue since the introduction of information sharing under the Foreign Account Tax Compliance Act (FATCA) in 2010.

While its aim is to crack down on tax evasion by Americans with financial assets held abroad, by requiring financial institutions and revenue authorities to provide the Internal Revenue Service (IRS) with information, it has led to some Europeans who also hold US citizenship - but who no longer live or earn an income there, or have any ties with the country – being required to file tax returns, and in some cases settle tax bills.

Brian Hayes, MEP, said that the aims of FATCA “are admirable”, but that it is having unintended and “deeply unsettling” effect on many Irish and EU citizens.

“There are potentially thousands of accidental Americans in Ireland who could be subject to huge US tax bills and they don’t know about it. Because of our long-standing cultural and family ties with the United States, Ireland could be worse affected than many other countries in the EU,” he said.

Ireland was one of the first signatories to the FATCA agreement in 2015, and in response to a letter from Mr Hayes, Revenue chairman Niall Cody said that information sharing first started in 2015, and that 2017 information will be exchanged in September 2018. However, for confidentiality reasons, Mr Cody did not elaborate on the number of cases

“Therefore, we do not know the full extent of what taxes the IRS might be imposing on Irish citizens who also have US citizenship,” Mr Hayes said, adding that he is calling on the Irish government to get “ahead of the curve” on this issue before many people find out they have huge US tax bills.

“Cohorts of people should not be hit with extra bills due to some anomaly in US tax law,” he said.

One of the most famous “accidental Americans” is British foreign secretary Boris Johnson. Born in New York, he was required to pay tax on the profits of a sale of a UK property to the IRS some years ago – even though no such tax was liable under the UK regime.

And it’s not just US taxes that can be an issue. European banks have also gotten decidedly cautious about dealing with US citizens since tax evasion scandals broke some years ago. One so-called “accidental American” is Jude Ryan. Born in Boston of an Irish father and a French mother, Mr Ryan left the US for Europe when he was five, and, while he held a US passport until he was 16, he has since switched to a French and Irish passport, and no longer has any links with the US.

However, about three to four years ago he started to get questions from his banks querying the fact that he was born in the US. It has since led to “ blatant discrimination” from European-based banks, he argues, noting that it has been difficult to obtain everyday banking products as a result, and has been “deeply stressful”.

“Once you disclose that you were born on US soil, banks won’t touch you,” he said.

While one option is to renounce US citizenship, this is understood to cost in excess of $2,000 - and your US tax affairs have to be up to date in order to do so.

Ryan is hoping that a draft resolution on the issue will be brought forward by the European Parliament this summer, calling on the European Commission to push back against US tax laws.