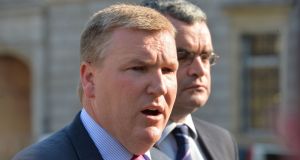 Fianna Fáil finance spokesman Michael McGrath has called on the Central Bank to clarify if it endorsed a product that offers an interest-only mortgage for buy-to-let investments.

Mr McGrath was commenting on buy-to-let mortgages being advertised by Dilosk/ICS Mortgage that involves the option of the borrower – including private landlords - paying interest-only for up to 15 years.

Mr McGrath warned such investments could become personal debt and that a judgment could be made against the family home.

“This could return back to hit individuals. When this goes wrong it could hit a lot of innocent victims,” he told RTÉ’s Morning Ireland.

“I’m not sure the Central Bank specifically examined this.”

Mr McGrath said that if a move was made to help landlords then it should be done through the tax system.