Paradise papers reveal that CAB has sought material from AIB in the Isle of Man pertaining to a transaction referenced in the Moriarty Tribunal concerning Denis O’Brien and Michael Lowry. Video: Enda O'Dowd 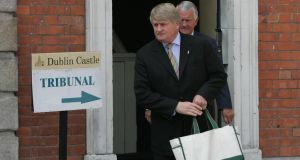 The Criminal Assets Bureau (CAB) has sought documents from AIB as part of its investigation into transactions between businessman Denis O’Brien and former minister for communications Michael Lowry that featured in the Moriarty Tribunal, files in the Paradise Papers show.

An offshore branch of the now State-owned Irish bank was approached by the Isle of Man’s financial crime unit in March 2015 and informed that they had received an international assistance request from the Irish authorities.

The leaked files also record that AIB plc in Dublin was approached by CAB. When asked if they had any files relating to two accounts with the Isle of Man (IoM) branch, the Dublin headquarters of the State-owned bank said they did not, but told the IoM branch of the approach.

The AIB account in the Isle of Man was used in the making of eight payments totalling £407,000 by O’Brien to a number of individuals two months after the State’s second mobile phone licence was awarded to O’Brien’s Esat Digifone in May 1996. The account held money belonging to Mr O’Brien but was, at his request, set up by his then financial adviser, Aidan Phelan, in Mr Phelan’s name.

Mr Lowry received £147,000 from the account, via the late David Austin, a businessman who knew both Mr O’Brien and Mr Lowry. The identity of the others who received the payments from the IoM account has never been revealed.

Mr Lowry told the tribunal he had received the money from Mr Austin as a loan, and Mr O’Brien said he had paid the money to Mr Austin in return for a house in Spain. The tribunal decided the payment was linked to the licence competition.

When the tribunal’s report was published in 2011, it was immediately referred by the government to the Director of Public Prosecutions and the Garda commissioner.

Contacted by The Irish Times, Mr Lowry said that since the tribunal ended “no one has ever sought any additional information from me or any of my advisers”. He would not comment further. A spokesman for Mr O’Brien did not respond to a request for a comment. Mr Phelan said CAB had not been in contact with him.

The accounts being investigated by CAB featured in the evidence heard by the tribunal, which in its report found that Mr Lowry had “secured the winning” of the State’s second mobile phone licence competition for Mr O’Brien’s consortium, Esat Digifone.

It also found Mr O’Brien had made payments to, and had supported a loan to, Mr Lowry and that the transactions were “demonstrably referable to the acts and conduct of Lowry”.

The two men have said the tribunal was wrong in its findings. The payments referred to by the tribunal included the one that went via AIB IoM.

Arguably the most direct evidence heard by the tribunal of a payment from Mr O’Brien to Mr Lowry concerned how money from an account of Mr O’Brien’s in Dublin ended up in an account in Mr Phelan’s name with AIB IoM, before going to an account of Mr Austin’s in Jersey, and then to an account in the name of Mr Lowry in the Irish Nationwide, IoM. The money was returned by Mr Lowry to Mr Austin in 1997, on the day the McCracken (Dunnes payments) Tribunal was established.

The Appleby law firm in the Isle of Man is now supplying management services to two of AIB’s offshore businesses which are in the process of being wound down. A number of reports on regulatory and other matters contained in the Paradise Papers, which include leaked files from Applebys, refer to the CAB investigation.

The law firm’s IoM office also acts for IoM trusts belonging to Mr O’Brien, and a number of companies in IoM and elsewhere that are owned by the trusts.