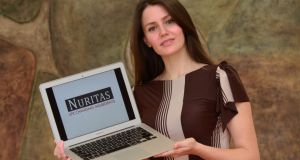 Dr Nora Khaldi, founder of Nuritas Ltd: “When I started working in food it quickly became clear that this was where the opportunity lay.”

For most people, food is food. For bioinformatics specialist Nora Khaldi, it is the starting point for a data mining process that will analyse a foodstuff’s composition in minute detail. The reason for digging deep is to find proteins with therapeutic qualities that can benefit health problems such as high cholesterol and diabetes.

Food mining is a complex process and Khaldi has developed a leading-edge process that combines multiple algorithms, statistical analyses and data integration to do so. This technology has now been spun out into recently formed start-up company Nuritas.

The company’s initial target market is the food industry, where its technology can help food companies add health value to their ingredients quickly and cost-effectively.

“We identify therapeutic molecules known as bioactive peptides,” Khaldi explains. “These molecules have various therapeutic qualities and once identified, can be added to products, allowing food companies to quickly gain market share in the functional food market.

“We mine existing commercial ingredients for new bioactive peptides which means new markets can be conquered with no extra development and manufacturing costs,” she adds. “We also identify the active ingredients responsible for a given functionality and co-develop new ingredients with food and ingredient companies.”

Khaldi is a mathematician with a PhD in molecular evolution and bioinformatics from Trinity College Dublin. She has been working in the School of Medicine and Medical Science at University College Dublin since 2008 and is currently participating in NovaUCD’s Venture Launch Accelerator Programme, which equips academics with skills to lead new commercial ventures.

“I come from an unusual multi-disciplinary background and that has been key to my being able to start Nuritas,” Khaldi says.

“During my research I came into contact with a lot of food companies and could see they needed data but didn’t have the time or the skills to mine for it correctly. I had always wanted to start my own company and knew broadly it would be in the data-mining area. When I started working in food it quickly became clear that this was where the opportunity lay.”

Nuritas is an Irish company and its HQ and research function will be based here.

However, as Khaldi sees the US as the company’s most important initial market, she has also established a sales base on the west coast.

She chose San Francisco as she worked closely with colleagues at the University of California, Davis, during her research phase and received support from the school of entrepreneurship there.

The company, which has been designated as a high-potential start-up by Enterprise Ireland, is now looking for investment in the region of €1 million to support its full commercial launch. It will begin recruiting staff in January for four positions with more to follow after six months.
– OLIVE KEOGH