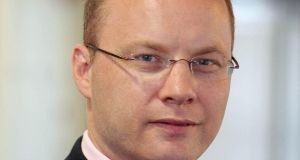 Since Independent TD Mick Wallace first made his allegations in the Dáil concerning the sale of Nama’s Northern portfolio and revealed the existence of £7 milllion in an offshore bank, it has been the one subject which has dominated the world of business in the North this year.

The chairman of the Stormont inquiry, Sinn Féin’s Daithí McKay, believes the transaction could have all the “makings of a huge scandal surrounding the biggest property deal in the North’s history”.

Since the inquiry began into the sale of Nama’s former Northern Ireland loan portfolio – known as Project Eagle – to the American group Cerberus for £1.24 billion – there has been a never ending series of claims, counter-claims, accusations, character assassinations and the occasional appearance of property developers at Stormont.

So far the inquiry has heard from the North’s First Minister, Deputy First Minister and a former finance minister, but it has yet to hear in person from many of the central characters involved in the sale.

These include Cerberus and the key architects who allegedly came up with the concept of the sale in the first place – former Nama adviser Frank Cushnahan and Ian Coulter, former managing partner of Belfast legal firm Tughans. Both Cushnahan and Coulter have steadfastly denied any wrongdoing on their part and have maintained their willingness to co-operate with the various investigations that are under way.

There is also an inquiry, soon to conclude, by the Law Society of Northern Ireland, while the UK’s National Crime Agency and various US agencies are also examining key events and individuals involved.

While Project Eagle dominated the headlines, there were also signs of economic improvement. The latest industry research suggests that the North’s construction sector, like the rest of the economy, displayed evidence of some recovery during 2015.

According to Richard Ramsey, chief economist Northern Ireland at Ulster Bank, the local private sector showed a “notable improvement in business conditions” last month and many firms increased their employment numbers at their fastest pace in 14 months.

However, as Ramsey acknowledges, the latest PMI survey also reflects the difficulties experienced by the North’s manufacturing sector throughout the last year. A number of key local manufacturers, including Michelin, Schrader, Invista, Bombardier and Caterpillar, all confirmed significant redundancies in Northern Ireland over the last 12 months.

Davy Thompson of trade union Unite says more than 2,500 high-value manufacturing jobs were lost in 2015. “Those who say manufacturing in Northern Ireland is not in crisis are in denial,” Thompson has warned.

While the North’s traditional manufacturing sector has struggled over the last 12 months, there are some encouraging signals that ambitious businesses in key sectors from tourism to food production and technology have also flourished.

Moy Park, Northern Ireland’s biggest private sector employer and its largest food firm, was sold in a £946 million deal to the Brazilian JBS Group, signalling a new chapter in its 72 year history, while Derry-headquartered 8over8+ was sold to the Cambridge group Aveva in a £27 million deal.

Northern Ireland also cemented its growing reputation as a film and television location by securing yet another Game of Thrones season. It was estimated in 2015 that the fantasy television series has contributed about £110 million to date in terms of goods and services to the local economy and has successfully persuaded a new generation of tourists to visit Northern Ireland for the first time thanks to the show’s global success.

While Game of Thrones is an emerging industry all of its own in the North, the lights are fading for one local media organisation as the year draws to a close – Belfast-based UTV Media has agreed to sell its television station and brand to ITV as part of a £100 million deal. It will mark the end of an era for the station which first went on air in 1959, and the loss of a Northern Ireland-listed business.

A new stock market listing in July of this year for the Belfast-headquartered IT services group Kainos, means there will be at least two publicly listed companies in the North – with Newry’s First Derivatives, the second – as 2016 kicks off. Perhaps the next 12 months will bring more.