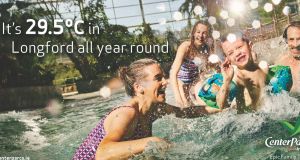 Chemistry’s ad for Center Parcs. Its other clients when it closed included Dunnes Stores, Audi, Windsor Motors, and the Irish Cancer Society

“The tectonic plates are shifting,” says Ray Sheerin, co-founder and managing director of Chemistry, the leading Irish advertising agency that shut up shop in January. The geological expression got a good airing during the general election – a handy way to describe a massive change in the landscape – but for Sheerin the impact of the ground shifting in Irish adland has been very real.

The decision to close Chemistry came, he says, after nearly two years of discussion and strategising at boardroom level to plot ways to make the business viable.

Established in 1999 by experienced admen Mike Garner (who left to consult at Core in 2019) and Sheerin, Chemistry started out as it finished, a strategic planning and creative agency known for its quality work that had, over the years, earned it a large cabinet full of international and domestic awards as well as Irish agency of the year status several times.

The client roster when it closed included Dunnes Stores, Audi, Windsor Motors, and the Irish Cancer Society among others. Some of the work for these clients, as well as campaigns for Center Parcs and the Irish Examiner are still on air. In the past, clients featured heavy advertisers including Tesco Mobile, Meteor, Eircom, Leinster Rugby, Lidl and Kerry Foods.

When many other agencies went to the wall, the Dublin-based company weathered the downturn in 2008 by cutting back all discretionary spending, while maintaining staff numbers. However, looking back, Sheerin says the agency “never really bounced back after that”.

In 2019, it became clear that the business was struggling to the point of becoming unviable. “Two of our top clients moved on and a third was doing less business,” says Sheerin, who won’t identify the companies, “because I don’t want to appear to be pointing the finger at them because I’m not”.

There were other issues – many peculiar to the sector. Charge-out rates in Irish advertising lag so far behind other professional services that it makes running a commercially viable business almost impossible, he says.

“Agencies tend to charge a blended rate [for professional services] of about €100 an hour,” he says. As a comparison, in the legal world it would be a very junior lawyer that would be charged out at that rate, senior partners bill clients many multiples of that. In those professions, clients pay for experience, he says, something that hasn’t filtered into advertising.

He recalls feedback from a new-business pitch when the agency was still trying to survive that said Chemistry, which costed an hourly rate of €125, was too expensive. The agency that won the business charged €75 an hour.

In the corner of the business where Chemistry was operating – strategic planning and creative services – staff salaries are high because demand for such talent is strong, or as Sheerin puts it, “it’s an expensive business to resource”. And the era when clients typically stayed with an agency for five to 10 years is for the most part gone, replaced by three- to four-year pitching cycles and even campaign-by-campaign pitching, leading to further instability.

A notable trend in the industry, he says, is clients taking work, such as basic design and print production, in-house. That is taking away what was always considered bread-and-butter income for agencies – the steady, predictable money, that helps “keep the lights on”.

Global consultancies “muscling in” is also changing the Irish ad industry, says Sheerin. These global behemoths can offer full business services to clients – from accountancy to advertising, or as Accenture Interactive describes its offer as helping “the world’s leading brands transform their customer experiences across the entire customer journey”. It’s that entire journey that makes it difficult for local creative shops like Chemistry to compete.

Accenture’s purchase of Irish ad agency Rothco in 2017 took the industry by surprise, and signalled a further shift in the local landscape.

“And Acne is recruiting creatives in Dublin,” says Sheerin, referencing Deloitte’s expansion into advertising through its Deloitte Digital project. In 2017, the global consultancy bought Swedish ad agency Acne announcing that “by combining Deloitte’s deep data and technological expertise, with Acne’s exceptional creative experience, together we will help build brands for the digital age”.

Sheerin does see one upside for the industry in the global consultancies entering the Irish advertising market – it might boost charge-out rates across the board: “One thing we know for sure is that these consultancies know how to charge.”

Chemistry was not entirely a standalone agency. It was 49 per cent owned by Ogilvy & Mather, which did not assume the role of white knight charging to the rescue. Jane Gregory, managing director of Ogilvy Dublin, says that she had been “sorry to hear the news of Chemistry’s closure” and “as a minority shareholder, we were informed before Christmas of the executive management team’s decision to close the business”.

Sheerin says he sought other support to prevent closure but no deal emerged. He says there has been an “orderly wind-down of the business and all creditors [will be] paid”.

When it closed, Chemistry had 19 staff with five more in Clickworks, an ancillary production business the agency owned.

The former managing director has been writing to the heads of other Irish ad agencies urging them to consider his former staff members if they are recruiting. For himself, he’s taking time off to consider his next move.