TV3 unveils its plans for coverage of Six Nations 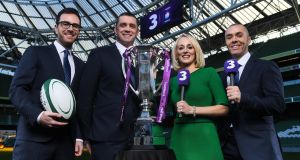 TV3 Group has unveiled Joe Molloy as the anchor of its coverage of the Six Nations rugby tournament, to which it has the television rights for the next four years.

Molloy is a presenter on Newstalk’s sports programme Off the Ball and also co-hosted TV3 show Extra Time during the Euro 2016 football tournament.

Niall Cogley, TV3’s executive producer for the Six Nations, said he had “nothing but respect” for RTÉ’s coverage. TV3 is “not looking to reinvent television coverage of rugby”, but will still be able to “develop our own style”, he said.

He said the choice of Molloy as presenter was “a bit of a statement” for TV3.

“We think he is a real talent for the future. He ticks so many boxes in terms of profile, knowledge and expertise, and there’s an excitement to be had in bringing someone fresh in for a significant broadcasting moment like this.”

Asked about his approach to punditry, former Ireland and Munster player O’Gara said it was important to remember that the performances of the players was about more than just the 80 minutes they spend on the pitch.

“You can give an insight into what the players might potentially be feeling. Because it’s not robotic,” he said at a launch event at the Aviva Stadium in Dublin on Friday.

TV3 Group snatched the rights from RTÉ for 2018-2021 in a deal with the Six Nations Council announced in November 2015. RTÉ was unable to match the size of the offer made by TV3, which was in the process of being acquired by Virgin Media Ireland at the time.

Virgin is owned by Liberty Global, which is controlled by billionaire John Malone.

In “cutting the ribbon” on its coverage, TV3 Group managing director Pat Kiely said the company takes “the honour” of broadcasting the tournament “very seriously”.

This is TV3’s single biggest investment in sport and it will be looking to recoup some of the investment by selling advertising and sponsorship around the matches.

NatWest was last month confirmed as the new sponsor of the tournament, replacing Royal Bank of Scotland (RBS), clearing the way for other commercial deals to be done.

Although sports rights are typically loss leaders, rugby has been kind to TV3 in the past. The 19-year-old channel recorded its highest audience during the 2015 Rugby World Cup, with an average of 1.15 million people tuning in for Ireland’s game against France.

The 2018 tournament begins on Saturday, February 3rd, and TV3 will show all 15 matches.

Six Nations chief executive John Feehan said the organisers were, above all, hoping for a competitive tournament. “Obviously England has won the last two years and everybody wants to take them down this year,” he said.

England are favourites again for the 2018 tournament. Quinlan was the most optimistic of TV3’s team about Ireland’s chances. “I would be confident going into the tournament that Ireland would be very strong and could win it.”