It started and ended with radio, but it was news publishing that cost the most 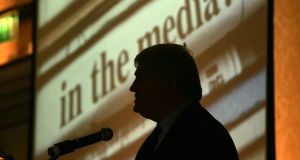 Denis O’Brien speaks at a 2010 conference on Confidence in the Media. Photograph: Cyril Byrne

O’Brien forms Communicorp and wins licence for Dublin radio station 98FM. He would go on to replicate the pared-down, music hits formula used by 98FM in stations in eastern Europe.

Spin FM is awarded a youth radio station licence. O’Brien is part of the consortium behind the new station.

Communicorp acquires majority stake in Newstalk, a national talk radio station. O’Brien is part of Phantom FM consortium that wins the alternative rock licence for Dublin. It was later rebranded as TXFM but closed in 2016 due to heavy losses.

O’Brien begins amassing his stake in Irish Independent publisher INM, initially acquiring 5 per cent stake. He begins to agitate for a radical restructuring of the media group, which was controlled at the time by Sir Anthony O’Reilly and his family.

Communicorp acquires Today FM, FM104, Highland Radio for a reported €200 million from Emap. He later sold FM104 to UTV for €52 million and Highland to Gerry Rabbitte for €10 million.

O’Brien raises his stake in INM to 25 per cent, giving him the power to block special resolutions.

O’Brien successfully applies for an injunction preventing RTÉ from airing a report about his receipt of a low interest loan from the IBRC, formerly Anglo Irish Bank

INM board members consider a bid for Newstalk. A disagreement emerges between Pitt and Buckley over the valuation of the business, ranging from a Davy valuation of €14 million to a value of up to €35 million placed on the station by IBI Corporate Finance on behalf of Communicorp. The deal does not proceed.

INM ditches proposed €4 million takeover of Celtic Media after series of controversies. Pitt leaves INM, having previously made a protected disclosure about Leslie Buckley to the Office of the Director of Corporate Enforcement.

The Office of the Director of Corporate Enforcement (ODCE) is successful in an application to High Court to appoint inspectors to INM to investigate an alleged data breach that it says was directed by Leslie Buckley and paid for by O’Brien.

O’Brien sells majority of his stake in INM to Belgian company Mediahuis, crystallising a multi-million euro loss. He is widely reported to have lost €500 million on his investment in INM.

Communicorp is bought out by UK-based Bauer Media Audio for a sum believed to be about €100 million.