Disney Plus ‘superbrand’ Star for adults who want ‘me time’ 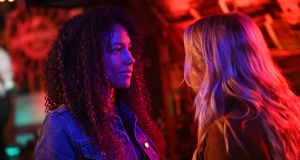 Big Sky, the thriller from David E Kelley, will be one of the new shows on Disney Plus ‘superbrand’ Star when it launches next Tuesday. Photograph: Disney/ ABC

Disney Plus’s new general entertainment brand Star will target adults, including Irish subscribers, searching for something to watch in “me time” according to a senior executive.

The mix of original programming and back-catalogue television and film hits from Disney-owned companies will be added to the service in 17 markets next Tuesday, with a view to pleasing “grown-ups” – some of whom may have been cajoled by their children into signing up.

“They said ‘look, we would love to have even more choice’ for what they called ‘me time’, a time when the kids have gone to bed,” said Jan Koeppen, Walt Disney Company president for the Europe, Middle East and Africa (Emea) region.

Star will become the sixth “superbrand” on Disney Plus alongside Disney, Pixar, Star Wars, Marvel and National Geographic. It will feature a glut of titles from production companies ABC Signature, 20th Television and FX, as well as from movie studios 20th Century Studios (previously 20th Century Fox) and Searchlight Pictures (previously Fox Searchlight).

FX’s Atlanta and Sons of Anarchy and ABC hits Lost, Scandal and Ugly Betty will be among the titles added, with the movie catalogue including 20th Century Studios hits Pretty Woman and The Devil Wears Prada to Searchlight’s The Favourite and The Grand Budapest Hotel.

Star Originals that will be available from next Tuesday include Big Sky, the David E Kelley thriller that has been airing on ABC in the United States, as well as adult animation series Solar Opposites and teen drama Love, Victor.

An explosion of Disney commissioning activity is now underway, with 10 European originals hailing from France, Italy, Germany and the Netherlands – some of them falling under the Star brand – revealed earlier this week.

Although no Irish or British productions were confirmed at a virtual company briefing on Wednesday, Disney’s existing plan to ratchet up its European commissioning to 50 productions a year by 2024 is set to boost opportunities for the creative sector amid the company’s fierce battle for subscribers with Netflix, Amazon Prime Video and other streamers.

“I think if you look across the 50, it is about quality rather than quantity. We are out there talking to the best production talent, the best writers, so we are really, really excited to engage with them and get the best ideas for this service,” he said.

The step-up in commissioning also coincides with pressure from European regulators and governments for the US on-demand giants to increase their proportion of European content.

This investment will inevitably come at a cost for subscribers, with the company recently signalling that its first price rise is on the way.

With the pandemic taking its toll on theme-park revenues and box-office receipts, streaming has proved a major bright spot for the 98-year-old Disney.

Disney Plus reached 94.9 million subscribers by the end of 2020, taking 15 months to reach a tally that Netflix, the first mover in this market, took nine years to exceed. Netflix remains well out in front with almost 204 million subscribers, however.

“It has been an incredible response to Disney Plus and it has exceeded even our lofty expectations,” Mr Koeppen said.