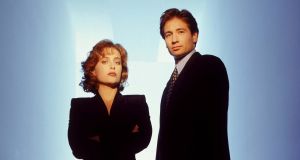 The X-Files: Scully (Gillian Anderson) was sceptical when Mulder (David Duchovny) claimed aliens were big fans of Disney Plus.

The Walt Disney Company is a funny old animal. The 98-year-old media conglomerate is a survivor of Old Hollywood, a pioneer of theme-park culture and now a streaming behemoth.

“Disney” is a byword for sentimentality and happy endings. But to get where it is today, the business has shown the kind of cut-throat ambition that wouldn’t seem out of place on the Death Star.

Today, the company will add Star, its less-obviously-Disney brand, to Disney Plus in 17 markets, with Irish subscribers among those to see the tab line up next to its existing “superbrands”, Pixar, Marvel, Star Wars, National Geographic and Disney.

While there will be a smattering of “Star Originals” – new shows that hail from somewhere within the Disney empire or are directly commissioned as such from its nascent European programming operation – Star will be most notable at first for its extensive back catalogue of classics from 24 to The X-Files.

Mulder, Scully and Jack Bauer were not always Disney properties, but they became so when Disney swooped to buy various US television and movie assets from Rupert Murdoch’s former company 21st Century Fox for $71.3 billion (€58.6 billion). That deal, despite the massive outlay it involved, looks increasingly wise on Disney’s part.

It already owned US network ABC, but the acquisition of 20th Television, FX, 20th Century Studios (previous 20th Century Fox) and Searchlight Pictures (previously Fox Searchlight) has given it a strong, broad position from which to launch its assault on streaming leader Netflix and other contenders.

As it transpires, Disney got its streaming service up and running just in time. The company that raked in $13 billion (€10.6 billion) in box office receipts in 2019, releasing no fewer than seven $1 billion (€821.9 million) films, has been able to take comfort in the fact that at least there were few better years than 2020 to be in the streaming game.

In its triumphant first 15 months, Disney Plus amassed 95 million subscribers, which took market creators Netflix (now on 204 million) about nine years to do.

The big questions for Disney now is when and to what extent those cinema mega-releases and theme-park queues will return, and whether its streaming stars, new and old, can shine bright enough to help it close in on Netflix’s lead.