Caveat: No matter what its management says, RTÉ seems to be fishing for State bailout 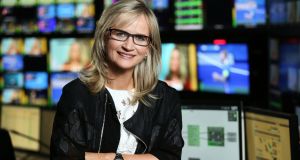 RTÉ director general Dee Forbes’s recent PR campaign to jolt the public and politicians into worrying about the broadcaster’s financial future is, by far, the most effective thing she has done

You wouldn’t know it from the feverish tone of some of the recent debate, but RTÉ is not in the midst of an existential crisis. The organisation is not under immediate threat. It won’t go bust. It is not drowning in debt.

RTÉ does have some clear financial issues, but they are chronic rather than acute. There is time to fix them.

Much of the recent furore has conflated two wholly separate issues. The first is RTÉ’s immediate financial position, which is not particularly precarious. It is manageable. The second, much more serious, issue is building a long-term funding model for RTÉ’s public service remit in an era dominated by US digital corporations. In the shadows of giants such as Netflix and Facebook, RTÉ is just a pygmy. The solutions to these threats lie outside of its control.

Strip out depreciation and RTÉ’s cash deficit is a mirage. Its operating costs have broadly matched income in recent years. Not bad for an existential crisis

Firstly, RTÉ’s short-term finances. Dee Forbes, its director general, issued a black warning that its finances are “unlike anything we have seen before”. She is running a campaign to eke more cash from the State, so it is understandable she would say this. But as an assessment of its financial position, it is as dramatic as anything on RTÉ One on a Sunday evening.

Much has been made in recent weeks of RTÉ’s €13 million deficit last year, its seventh in a decade. Scratch the surface, and the picture is more nuanced. More than 90 per cent of RTÉ’s deficit was made up of depreciation write-offs of the value of its property and, mostly, its equipment. These are just theoretical accounting charges, not a haemorrhaging of actual cash.

Accounting rules mean organisations are obliged to depreciate buildings. Anyone who truly believes RTÉ’s overall property assets in leafy Dublin 4 are declining in value in the current market needs to see a doctor.

Strip out depreciation and RTÉ’s cash deficit is a mirage. Its operating costs have broadly matched income in recent years. Not bad for an existential crisis. RTÉ’s public funding – the subject of much hyperventilation recently – is actually rising, albeit slowly.

RTÉ’s commercial revenues, as it keeps reminding us, have declined by €100 million since the boom 12 years ago. But let’s be serious here – this tells us very little.

When organisations are in true financial peril, debt is the poison pill. Fail to pay your debts, and a receiver knocks at the door and it’s game over. RTÉ’s debts are only about €50 million, a modest burden in the overall scheme of things. Those debts were also refinanced this year until 2026.

Cost control is RTÉ’s real poison. Over the medium term, its operating costs have risen moderately – €33 million over the past five years – but that is entirely the fault of management.

Controlling costs is a core function. There is a gaping hole in RTÉ’s bucket. Pouring in extra State subventions won’t solve this. Any extra crisis funding would soon be spilled all over RTÉ’s studio floors, unless that hole is filled.

Forbes is more than three years in the job. Her recent PR campaign to jolt the public and politicians into worrying about RTÉ’s financial future is, by far, the most effective thing she has done. Whomever was responsible for leaks threatening to scrap Lyric FM, sell off paintings, cease covering party political conferences etc; it was genius. It terrified its targets. Where was this guile when it came to managing costs?

Its €60 million, three-year cost-cutting plan announced this month is bafflingly vague. None of the proposed measures are properly costed, which makes you wonder how committed RTÉ is to implementing all of them. No matter what its management says, RTÉ appears to be fishing for a State bailout. It should be remembered that any extra Government subventions for RTÉ come from the State’s social welfare budget.

Perhaps the time has come to start a proper public debate about axing the licence fee altogether, and replacing it with equivalent funding directly from the exchequer

On the second issue facing RTÉ – its appeals to fix the “broken” licence fee system to secure its long-term funding model, instead of kicking the can seven years down the line as the Government suggests – the broadcaster is on firmer ground.

Even if the State turns the €160 licence fee into an unavoidable household charge, whether you own a television or not, there will still be evasion, currently 13 per cent. Collection costs are 6 per cent, or €12 million per year. If the fee is to be an obligatory quasi-tax, it makes little sense to waste resources collecting it and chasing non-payment.

Perhaps the time has come to start a proper public debate about axing the licence fee altogether, and replacing it with equivalent funding directly from the exchequer. Household taxes are regressive anyway – a house of 10 adults pays the same as a person living alone.

Direct State funding would be stable with less waste and no evasion, and it could be funnelled to RTÉ through an independent third party: “Hi guys. You made your budget targets for Q1? Great. Here’s your cheque for Q2.”

There are also dangers with this, however, including the risk that the Government could leverage the situation. As has been proven in recent comments to Irish Times political editor Pat Leahy some politicians with gripes against RTÉ over its output are, shamefully, using this against it as it casts about for financial help. Strong laws and interlocutors would be essential.

There is also a lesson in all of this for other media outlets, such as the newspaper industry, which covets State funding to help cure its own ills. RTÉ will be okay, as it has a legal framework to protect it. The rest of the media doesn’t. If independence is to be cherished, the rest of the media should run a mile from politicians bearing gifts.

– An interesting post-script to the issues facing RTÉ is the apparently loosening attitude in the corridors of power to the prospect of a State-owned company making compulsory redundancies.

RTÉ has not, yet, proposed any compulsory layoffs and its unions have promised to fight it if it does. But as part of a recent analysis of RTÉ’s funding, it told the Broadcasting Authority of Ireland it might have to entertain the idea if the Government doesn’t fix its funding model.

It would set a major precedent for a State entity. RTÉ’s calculation may have been bluster, a threat to the Government that it would cause murder in the State’s industrial relations ecosystem unless it gets help.

So far, the Government has done little to scotch the idea, which may be telling in itself. For their own reasons, some other venerable State companies are also in flux, and might like compulsory layoffs as a cost-cutting option if they thought they could get away with it.

Bord na Móna staff in February even voted through a plan that included provision for forced layoffs, although those weren’t needed in the end.

What happens when the next Irish financial crisis, perhaps fuelled by the economic effects of climate change, presents challenges for State companies such as Gas Networks Ireland, ESB, or Coillte? Would the Government stay as quiet about the prospect of compulsory redundancies then as it has about the prospect at RTÉ now?

– There is no end in sight to the $9.6 billion battle between Irish-linked company, Process and Industrial Development (P&ID), and the Nigerian government, against whom the company won a huge legal judgment over a failed gas deal.

Nigeria has vowed not to pay, and this week it appealed an order for an initial $200 million payment to P&ID.

Nigeria also denied reports this week that it had “sacked” its legal team. It explained it had merely hired a second legal team to pursue a different angle to its fight to prevent P&ID gaining legal recourse to Nigerian assets.

The new lawyers may then “work with” the old lawyers on the case, it suggested, although it said hasn’t yet decided whether this will happen. What a deft sidestep. The government is clearly getting better at PR, then, after being trounced by P&ID in the publicity stakes in recent months.

Reports also emerged from Nigeria on Thursday that it has filed further alleged corruption charges over the deal against a named British executive linked to P&ID. Its game of hardball is being stepped up, the surest sign yet that both sides are determined to get back to the negotiating table.