Figures include first contribution from acquisition of Landmark Media 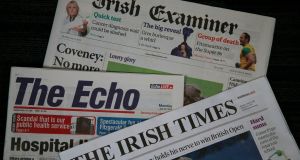 The accounts for The Irish Times DAC include trading from the Irish Examiner and other media assets acquired from Landmark Media Investments, from July 10th, 2018. Photograph Nick Bradshaw

The company behind The Irish Times made an operating profit of €2.61 million in 2018, up 5.2 per cent on the previous year.

The news publisher’s group turnover increased 21.1 per cent to €94.4 million, up from €77.9 million, its latest accounts show.

Halfway through 2018, it acquired the Irish Examiner and other publishing and radio assets from Cork’s Landmark Media Investments. The accounts for The Irish Times DAC include trading from these acquired businesses from July 10th, 2018, onwards, with the purchased assets generating €18.2 million of group turnover and making a loss before exceptional items of €600,000.

The directors said the company, which is owned by a trust, had “performed well in 2018”. Within The Irish Times title, revenues from consumer content grew 2.1 per cent, while advertising revenue rose 1 per cent.

Liam Kavanagh, the group’s managing director, said it was “a big achievement” to be able to grow both consumer and advertising revenues in light of the difficulties facing the news media market.

“The paid content model has been a tremendous success,” he said, citing a third consecutive year of rising consumer revenues.

The rate of growth in digital revenue accelerated last year to 15.8 per cent. The total number of subscribers, including some student subscribers, stood at 87,638 at the end of 2018 and has since exceeded 90,000.

Mr Kavanagh said he expected further growth this year in the number of paid digital subscriptions, which The Irish Times introduced in 2015.

Advertising revenues rose despite a double-digit decline in the market after the company brought certain sales functions back in-house.

“The market is more difficult,” Mr Kavanagh said of the advertising trend to date in 2019. However, he expects a quiet first half to be followed by a “fairly buoyant” second half, mirroring the pattern of recent years.

“Brexit is a factor, but it’s an unknown, and you have to deal with what is in front of you. At the moment, I think we will have a good second half to the year.”

Restructuring costs of €1.9 million arose from the purchase of the Irish Examiner and other assets and this was the main element in the company’s exceptional items total of €2.05 million.

There was also €546,000 amortisation of goodwill on a group investment in subsidiaries and a write-down of €1.4 million on an investment fund.

The media assets acquired along with the Irish Examiner in 2018 include majority stakes in radio stations WLR and Beat 102-103, a minority stake in Cork’s Red FM, six weekly regional titles and the daily Evening Echo, which has since been renamed the Echo.

Subsidiaries of The Irish Times DAC include property business MyHome.ie, training company Itronics and web publisher DigitalworX, while the group also has a 50 per cent interest in magazine publisher Gloss Publications.

Mr Kavanagh said that when Belgian group Mediahuis completes its acquisition of Independent News & Media (INM), the Irish Times group would be the only indigenous-owned media organisation of scale, apart from RTÉ.

This added to the responsibility of the group to build a sustainable media business for the longer term, he said.

“I think our ownership structure helps us in that because we don’t have a shareholder to pay dividends to. Anything we generate we can reinvest to support the individual brands.”