The Man Who Wanted to Fly gets TV premiere 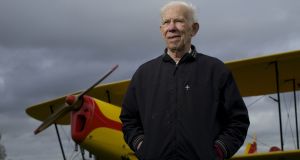 Open skies: Bobby Coote in the Frank Shouldice-directed Loosehorse documentary The Man Who Wanted to Fly.

When the story of an octogenarian Co Cavan farmer’s lifelong dream to fly is shown on RTÉ One on Monday night, it marks the next stop on a curious journey for the uplifting feature documentary.

The Man Who Wanted to Fly, directed by Frank Shouldice, secured its first funding not from the usual film industry sources, but from an aviation company, Dublin Aerospace.

The documentary, produced by Cormac Hargaden and Trisha Canning of production company Loosehorse, tells the story of Bobby Coote, whose ambition to take to the skies sees him enlist the help of neighbour Seán to create a runway and build a hangar on Seán’s farm.

Mr Hargaden met Dublin Aerospace founder Conor McCarthy when Loosehorse was producing television coverage of the Ernst & Young Entrepreneur of the Year in 2011.

“When Frank Shouldice approached us about the film, we thought it might be interesting if a private entity wanted to get involved,” said Mr Hargaden.

While The Man Who Wanted to Fly’s hero fixes antique clocks, Dublin Aerospace’s engineers fix jet engines. “But when Conor saw some of the footage, he saw an ingenuity and craft and precision that resonated with him,” he said.

“When we approached Screen Ireland and RTÉ, it was very helpful that we already had money on the table.”

The film was then self-distributed in cinemas earlier this year by Loosehorse, which used the services of Robert McCann Finn and Nell Roddy, two former Element Pictures executives who have since established a new distribution company, Breakout Pictures.

“The strategy was to go with a modest launch and let it build. By the time we finished, we had eclipsed all other docs this year except [major international productions] Free Solo and Diego Maradona,” he said. “We were delighted that the film landed so well – excuse the pun.”

Indeed, award-winning The Man Who Wanted to Fly has the highest all-time box office for a documentary in Odeon Cavan and sits in its top 20 across all titles for the last three years, ahead of titles such as Fifty Shades Darker, Dunkirk and The Greatest Showman.

“We sort of saw off The Avengers at one point. Bobby Coote is Cavan’s own superhero,” Mr Hargaden said.

The film’s release extended from six to 40 Irish cinemas, with the box office comfortably exceeding the distribution budget, meaning Loosehorse is now on its way to recouping production costs.

“The overseas sales will decide whether we actually tip into profit, as opposed to just paying everyone back.”

Subscription video-on-demand services like Netflix are “actually growing the appetite for documentaries”, he added, while a peak-time broadcast of 9.35pm on RTÉ One – “the best slot of the week” – albeit in the softer month of July, is also highly positive for the genre.

“I do think audience demand is growing,” Mr Hargaden said. “When people see their lives on screen, they respond to it.”