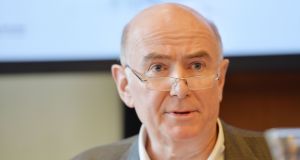 James Hickey, who will step down as chief executive of Screen Ireland at the end of July. Photograph: Alan Betson/The Irish Times.

The Government should consider levying audio-visual services that are not based in the State but target audiences here, to generate funding for Irish film and television, Screen Ireland chief executive James Hickey has said.

Such levies are allowed under the European Union’s audio-visual media services directive, which must be transposed into law by September 2020. This means the State could impose a charge on British broadcasters that sell advertising in the Irish market as well as on subscription video-on-demand companies such as Netflix and Amazon Prime.

“We should be looking at levies and contributions from all of these providers,” said Mr Hickey. “Over the next year, that is really important.”

In Screen Ireland’s submission to a recent Department of Communications consultation, it said it “strongly supports levies for content funding of Irish stories for Irish audiences” and said they should apply to both services established in the State and those based elsewhere.

While politicians may be concerned that such levies would be passed back to consumers in the form of higher subscriptions, that may be more difficult for companies to do at a time of heightened market competition.

The suggestion comes as the end credits are set to roll for Mr Hickey’s eight-year tenure at the development agency. He departs later this month in the hope that successive Irish governments will make good on a promise to award it €200 million in capital funding over 10 years.

The funds available for screen projects through the agency stood at €16.2 million in 2019

Screen Ireland’s pre-budget submission, which Mr Hickey has made one of his final tasks, will seek a capital budget of “at least €20 million” in 2020, which would restore its funding to pre-recession levels.

The funds available for screen projects through the agency stood at €16.2 million in 2019, but Mr Hickey said the industry remained underfunded.

“In my view, it would be really important that we would get a significant uplift for 2020 in order for us to fulfil our remit,” he said.

“But I certainly welcome the Government’s commitment to €200 million over 10 years, and I believe that we will be delivering results that will show it should be at least that, if not more.”

Mr Hickey will be succeeded in August by Désirée Finnegan, a former senior marketing executive at Warner Bros Pictures. He intends to remain involved in the industry.

Screen Ireland/Fís Éireann was until last year known as the Irish Film Board/Bord Scannán na hÉireann, with the name-change reflecting a widened remit.

Mr Hickey said a significant chunk of this year’s increase in its funding was used to extend its activity in television drama, and any uplift in Budget 2020 is likely to be similarly directed.

This year, it has backed projects such as Virgin Media Television crime drama Darklands and Element Pictures’ BBC-commissioned adaptation of Sally Rooney’s novel Normal People. But only about €2 million of its funds are allocated to television, which Mr Hickey said was “not enough”.

“It’s a relatively small amount of money and TV drama needs more money to support it. The challenge is that public service broadcasters are unable to fund a significant level of indigenous TV drama, yet on an international basis, TV drama has had what can only be described as a completely golden age. We need to be a part of that.”

Screen Ireland has submitted that the Broadcasting Authority of Ireland (BAI) Sound & Vision fund, which distributes about €12 million a year from licence fee receipts to television and radio producers, is “not responding to the urgent needs of the creative and audio-visual sector”.

At present, only producers with commissions from free-to-air broadcasters can avail of the funds. Companies that wish to pitch to platforms such as Netflix cannot use it as a source of funding. Even if this changes in future, Screen Ireland has questioned the wisdom of a body such as the BAI acting as both regulator and fund administrator.

“If the BAI do become the regulator of not only broadcasters in Ireland but also subscription video-on-demand services and user-generated content services, you have to ask yourself the question do they really have the headspace and time to be dealing with a production fund as well,” Mr Hickey said.

While there is much more the State can do to participate in the current boom in international audio-visual production, having come through a period that was “about survival” and little else, Mr Hickey said he was proud that the number of people working in the sector here doubled between 2008 and 2016.