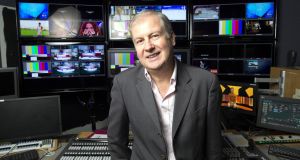 Alan Esslemont: he said TG4 would implement “a raft of solidarity measures” worth at least €3m to the independent production sector. Photograph: Michael Dillon

TG4 has announced two new development rounds and an additional output deal under a push to maintain a pipeline of programming amid the suspension in production due to Covid-19.

The broadcaster’s director general Alan Esslemont said TG4 would implement “a raft of solidarity measures” worth at least €3 million to the independent production sector, which is expected to suffer from both the immediate pandemic shutdowns and a squeeze on commissions in the months ahead.

The broadcaster has invited independent production companies to apply for a multi-annual output deal worth €400,000 a year for four years, with applications sought in the genres of factual programming, factual history, factual entertainment and traditional music entertainment.

It has also launched a development funding round for projects that might win support from funding sources such as the Broadcasting Authority of Ireland’s Sound & Vision scheme and Northern Ireland Screen’s Irish Language Broadcast Fund or provide an opportunity for co-production.

A new round of Cine4 – a TG4, Screen Ireland and BAI scheme for the development of original feature films in the Irish language – is also now open.

The rounds follow recent TG4 calls for producers to pitch ideas for programmes that relates to the coronavirus crisis and can feasibly be made during the period of economic shutdown and social distancing guidelines. These might include the repurposing of archive material to produce content for its autumn schedule. A “large number of applications” were submitted, TG4 said.

In response to the closure of schools, the public service broadcaster has also begun showing Cúla4 ar Scoil, an educational series for children attending Gaelscoileanna and Gaeltacht schools.

“In support of all those who are fighting Covid-19, TG4 has suspended all non-essential programme-making and has ensured that ongoing essential programming, including Nuacht TG4 and Cúla4 ar Scoil are produced in a safe manner,” said Mr Esslemont.

“We are acutely aware that this suspension of production is having a huge impact on the creative screen sector.”

As well as the feared drought in commissions, cashflow and insurance issues are weighing heavily on some production companies. This has prompted representative group Screen Producers Ireland to call on the Government to provide emergency funding to TG4 and RTÉ, Sound & Vision and Screen Ireland.

TG4 is what is known as a publisher broadcaster, meaning all of its programmes are made by independent production companies. Some 16 companies currently hold multi-annual output deals with TG4 that run until the end in 2021.

About one third of Irish production companies regularly work with TG4, making it an important commissioner in the market, while 77 per cent of the broadcaster’s funding goes into Irish language programming.