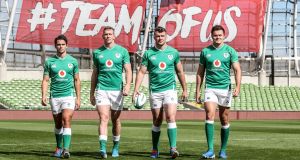 Deciding to extend a major sponsorship deal with Vodafone was “a no-brainer”, the Irish Rugby Football Union (IRFU) has said, given the success of the ‘Team of Us’ campaign in building support for the national team in recent years.

Speaking ahead of the team’s opening match against Scotland in the Rugby World Cup in Japan on Sunday, IRFU commercial director Padraig Power said the award-winning campaign had been instrumental in helping to create a buzz ahead of the tournament.

“The feedback towards the campaign has been incredibly positive and the team on Sunday would not be as good as it was without the lift it has gotten from it,” said Mr Power.

Vodafone, which replaced rival Three Ireland as the Irish rugby team’s sponsor with a €15 million four-year deal with the IRFU in mid-2016, earlier this month renewed the contract for a further four years for an estimated €16 million.

The sponsorship extension out to 2024 sees Vodafone Ireland continue as the principal sponsor of the Irish rugby team and communications partner to the IRFU.

The agreement also sees Vodafone become official sponsor of the IRFU women’s interprovincial competition. The new deal commences on July 1st, 2020 when the current one expires.

Mr Power said Vodafone’s commitment to looking beyond individual results as well as its wish to help grow the sport at all levels had been as important as its creative input in helping to build support.

“The Team of Us theme really works well because want to come together to watch rugby. It is a collective experience and has become more important over the years. This is my fifth World cup with the IRFU and in the 20 years I’ve been here there have been so many changes particularly with the media sector fragmenting but rugby is one of those things that people want to watch live and to do so with other people,” he said.

Vodafone’s head of sponsorship Gerry Nixon was also keen to highlight the collective experience promoted via the Team of Us campaign, which has extended in the run-up to the Rugby World Cup via the “Everyone In” ads and Ireland’s Ball. The latter is a specially created rugby ball that has gone to Japan with the national side that contains the fingerprints of 32 people from every county.

“The Rugby World Cup is set to be another one of those great occasions where the whole country comes together to watch sport. If you think back to moments like Katie Taylor at the Olympics, Stephen Roche in the Tour de France or the Irish football team at Italia 90, we’re looking at something similar now,” he said.

With two-thirds of Irish people identifying themselves as rugby fans, supporting the IRFU allows Vodafone to reach a significant chunk of the population. The fact that the game appeals to women as well as men also makes it a compelling bet for the company.

“The sponsorship agreement is a big deal as it is one of the most sought after assets in Ireland but we believe it is one that is justified for us,” said Mr Nixon.

“What we are trying with the partnership we have we the IRFU is to go beyond just having a logo on a shirt and handing over a cheque. We’re keen to use the agreement to help us use our technology to aid the team, must as SAP do with the German national team and IBM does for the Wimbledon tournament.”

“We’re trying to help the IRFU deliver as an organisation to grow the game over the long term,” Mr Nixon added.