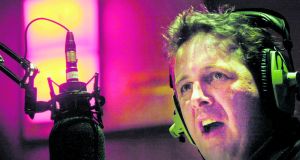 Today FM’s Ian Dempsey and Newstalk’s Ivan Yates were among the main winners in the latest radio ratings, while Ryan Tubridy and Ray D’Arcy also added to their audience over on RTÉ Radio 1.

The Communicorp-owned Newstalk touched a new record high in its market share, which now stands at 6.9 per cent, according to the Joint National Listenership Survey (JNLR) for January to the end of December 2018.

All of its weekday peak-time shows made gains, including drivetime host Yates, who now has 170,000 listeners for his show the Hard Shoulder, up 13,000 since the last survey and a substantial 31,000 listeners year-on-year.

Pat Kenny’s audience climbed 6,000 since the last survey to 155,000, up 12,000 year-on-year, and is now at its highest point since the former RTÉ presenter joined Newstalk. The Peter Casey Reports, segments recorded for Newstalk by the former presidential candidate, will air on Kenny’s show from next week.

Lunchtime Live, presented by Ciara Kelly, now has 105,000 listeners, up 4,000 since the last survey and 6,000 year-on-year. Dr Kelly’s audience has now surpassed that of her slot predecessor George Hook.

Newstalk managing editor Patricia Monahan said the strategy of pursuing 25-54-year-old listeners was “paying off” for the station.

Big news stories such as Brexit and the children’s hospital controversy continued to draw listeners to the station, she added, while new breakfast presenter Kieran Cuddihy was “settling in really well”.

On Today FM, which is also part of Denis O’Brien’s Communicorp, breakfast presenter Ian Dempsey posted his best audience figure in almost three years. His listenership of 180,000 is up 20,000 year-on-year and 18,000 since the last survey.

RTÉ 2fm, which celebrates its 40th birthday this year, fell back slightly at breakfast and drivetime, although the Tracy Clifford Show added 3,000 listeners since the last survey to reach a show record of 145,000, up 12,000 year-on-year.

“We thought we would move on a little further, but no panic,” said head of 2fm Dan Healy of the station’s overall performance.

It was a “tough” January for 2fm’s workforce following the death of presenter and producer Alan McQuillan after a sudden illness, Mr Healy said.

On the more volatile weekend ratings, Miriam O’Callaghan’s Sunday with Miriam slipped back to 246,000, down 25,000 listeners since the last survey and 13,000 year-on-year.

Head of Radio 1 Tom McGuire said it had been a “steady” JNLR for Radio 1 and drew attention to Mary Wilson’s Drivetime, which is holding up despite “a really competitive space”.

Drivetime’s audience of 221,000 is down just 1,000 since the last survey and 6,000 year-on-year, despite the surge in listeners for Newstalk in a similar time slot. Today FM’s The Last Word with Matt Cooper, which now has 142,000 listeners, has also made gains and is up 5,000 since the last survey and 8,000 year-on-year. Yates’s show is half an hour longer than both Wilson’s and Cooper’s.

Mr McGuire acknowledged that the overall gap between market leader Radio 1 and Newstalk “has been wider” in the past, but said he welcomed the competition as it “keeps our people energised”.

Radio 1 retained its market share of 21.9 per cent, while 2fm fell from 7.2 per cent to 7 per cent and Today FM edged up to 7.4 per cent, from 7.3 per cent. The survey also showed that Communicorp’s 98FM and Wireless Group’s FM104 made gains in the Dublin market, as Sunshine 106.8 slipped. In Cork, the national stations advanced as the market share of local stations fell back.

Some 83 per cent of people aged 15-plus listen to the radio every day, with the average listening time exceeding four hours, according to the survey of about 17,000 people prepared every quarter for the radio industry and advertisers.

“Radio doesn’t sell advertising space, it sells the ability to reach a huge audience and the results out today show that 3.1 million people every day tune into Irish radio.”

Radio accounts for 85.5 per cent of audio consumption, according to Ipsos MRBI research. This compares to 8 per cent for listening to owned music, 4.9 per cent for streaming service Spotify and 1.6 per cent for podcasts.

Mr Healy said there were “challenges” in attracting 15-34-year-olds, but otherwise radio had held up strongly as a medium over the past decade.

“The power of voice, and the power of personality is what sets us apart,” he said, paying tribute to veteran DJ Larry Gogan, who recently departed 2fm.

Advertisers “need to understand the power of radio” as shown by the JNLR, Mr Healy added. “We are spending a ton of money as an industry to make sure that this is accurately measured.”

1 ‘No demand... because there are no people’ at well-known Dublin pub
2 HSE says fix for Covid Tracker app rolled out to all Android users
3 UK criticised for ‘unforced errors’ on post-Brexit trade deals
4 Nearly 30,000 could lose pandemic payment if they do not confirm eligibility
5 Oura ring: Wearable device that tracks activity and vital statistics
6 Face masks developed in Ireland could help meat-plant workers
7 MSD buys Takeda biologics plant in Dunboyne
8 Bank of Ireland does U-turn after refusal to reimburse ‘smishing’ victims
9 Unilever would scrap HQ move if Dutch ‘exit tax’ law enacted
10 What will the office market look like after the great remote working experiment?
Real news has value SUBSCRIBE