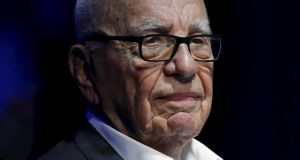 Rupert Murdoch, owner of Wireless, which would be a logical buyer for Newstalk. Photograph: Mike Blake/Reuters

Rebekah Brooks, chief executive of News UK, the newspaper publisher that owns Wireless, confirmed at a company meeting in Dublin this week that it examined a deal for Newstalk, although it has decided not to pursue it “for now”.

She suggested to those present at the meeting, however, that Mr Murdoch’s group was leaving the door open on a possible future bid for Newstalk.

“Never say never,” Ms Brooks told the meeting, according to senior sources who were present in the room.

Ms Brooks, a former editor of the now-defunct News of the World and a trusted corporate ally of Australian-born media baron Mr Murdoch, was addressing a meeting in Dublin of staff from his Irish media interests, which includes the Irish editions of the Sun, the Sunday Times and the Times.

The meeting was also attended by some senior executives from Wireless Group, which in Ireland owns six radio stations, including Q102 and FM104 in Dublin, LMFM in Louth, 96FM and C103 in Corkb and Live 95FM in Limerick.

Ms Brooks fielded a question from the floor about whether Wireless held any interest in buying Newstalk, which Mr O’Brien tried to sell to Independent News & Media (INM) in 2016, and she confirmed that it had considered it.

A source later stressed, however, that News UK/Wireless did not reach an advanced stage in its recent examination of a possible Newstalk bid, and hadn’t, for example, conducted any financial due diligence.

Wireless would be a logical buyer for Newstalk, however. It would add clout to the Wireless offering in the Dublin market, and would probably also clear regulatory hurdles on cross-media ownership and competition concerns, should Mr O’Brien actively renew his desire to sell the station.

His previous attempt to sell it to INM, where he is also the main shareholder, sparked a major row between his representative Leslie Buckley, who is INM’s chairman, and the publishing group’s former chief executive, Robert Pitt.

Several well-placed sources suggested Communicorp valued the loss-making station in the region of €36 million, while a valuation commissioned by Mr Pitt at the time was only half that.

A row over the price later led Mr Pitt to make a whistleblower complaint about Mr Buckley to the State watchdog, the Office of the Director of Corporate Enforcement, which is running an ongoing investigation into INM. The proposed deal was abandoned.