Netflix overtakes Disney to become most valuable US media company 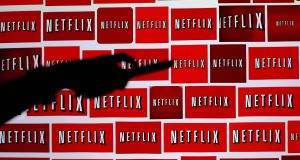 Netflix shares have added more than 70 per cent so far this year. Photograph: Reuters

Netflix’s market capitalisation briefly surpassed that of the Walt Disney Company on Thursday, making the streaming service the most valuable media company in the US.

The move marks a symbolic moment, as a Silicon Valley company focused entirely on digital TV and movies is seen as more valuable by investors than one of the most famous names in Hollywood.

After years of wary collaboration, the two companies are about to become head-on competitors. Disney is preparing to launch a new streaming service for TV and movies in the coming months, and said it would remove some of its content from Netflix when its current deals expire. In April, it launched ESPN+, a new sports-focused streaming service, in its first move to take its programming directly to consumers.

The two companies’ values were just a few hundred million dollars apart on Thursday morning, as their share prices continued to fluctuate during intraday trading. At about 11am in New York, Netflix had climbed just over 1 per cent to $348.43 (€297), giving it a market capitalisation of $151.9 billion. Disney, down 1 per cent, was worth $151.6 billion.

Netflix shares have added more than 70 per cent so far this year, bolstered by better than expected subscriber numbers and key content deals with former US president Barack Obama and top US TV creator Ryan Murphy.

The streaming service had already closed at a new record high on Wednesday giving it a valuation above Comcast, as Netflix climbed 4 per cent on news of its multimillion-dollar deal with the Obamas. Comcast was down 1 per cent to a market capitalisation of $145 billion on Thursday morning, after the cable operator and NBCUniversal parent said this week it was looking to take on Disney in a battle for Fox’s entertainment assets.