RTÉ to spend €1.7m on a makeover of its news studio

Overhaul will include graphics, lighting and an automated camera system 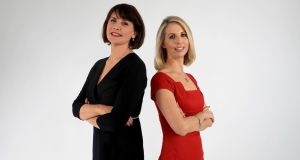 Bryan Dobson and Sharon Ní Bheoláin were replaced on “Six One” by Keelin Shanley and Caitríona Perr, above

RTÉ is set to spend €1.7 million on a makeover of its news studio this year, despite recording a €20 million loss in its most recent annual accounts.

The cash-strapped public broadcaster is seeking tenders for an upgrade of its news studio, which it expects to cost €1.7 million excluding VAT. The overhaul will include graphics, lighting and an automated camera system that will “give a new look to RTÉ News”, according to tender documents.

It will also provide a second presentation area in the studio by installing a smaller news desk. LED lighting will be used to create a “daylight colour temperature”, while a new video wall will allow for increased use of “augmented reality and graphics templates”.

It is the first major makeover of the RTÉ news studio since February 2009, when a €1.3-million upgrade was unveiled. Some “subtle but significant” improvements were also made in 2014, when the theme tune and graphics were changed at a cost of €25,000.

Plans for an overhaul of the news studio follows significant personnel changes last January, when Bryan Dobson and Sharon Ní Bheoláin were replaced on Six One by Keelin Shanley and Caitríona Perry.

Prospective contractors have until July 9th to submit a tender for the upgrade works, according to the documents.

“The space on the [news studio] floor will be expanded to provide two presentation areas using the same camera chain with the addition of a new robotic camera and a camera rail,” it states.

“New graphics will be designed for the new video-wall to give a new look to RTÉ News. Tungsten lighting will be replaced with LED lighting to give daylight colour temperature. The project will provide the capability for the increased use of automation, augmented reality and graphics templates,” the tender document adds.

The estimated value of the works is €1.7 million plus VAT, which includes €600,000 for display screens, lighting, and TV equipment; and €300,000 for robotics and installation.

The new LED lighting is expected to cost up to €150,000; while the studio automation system and associated system integration has been costed at about €120,000.