Richard Crowley, former presenter of the News at One, has left RTÉ 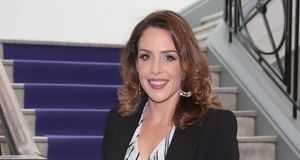 In addition to her new role with RTÉ, Sarah McInerney will continue to present the Sunday show on TV3. Photograph: Brian McEvoy

Ms McInerney, who previously presented Newstalk Drive, will continue to present the Sunday Show on TV3, a statement from RTÉ said Wednesday.

Meanwhile Cormac Ó hEadhra, who previously presented the Late Debate, will present a new show, Saturday with Cormac Ó hEadra, in the slot formerly held by Claire Byrne between 1-2pm. He will continue to present Raidió na Gaeltachta’s Cormac ag a Cúig, from 5-7pm on weekdays.

Ms Byrne will join Áine Lawlor in presenting the News at One. The pair will present on alternate days. Richard Crowley, a former Prime Time presenter and most recently presenter of the News at One and the This Week programme, has left RTÉ, a spokeswoman confirmed.

This Week was presented by Mr Crowley with Colm Ó Mongáin. It is understood that Brian Dowling, who has been filling in for Mr Crowley, will stay on with the programme.

“The new presenting team of Áine and Claire on RTÉ Radio 1’s News at One is exceptionally strong by any measure. And the move of Cormac Ó hEadhra into weekend peak on RTÉ Radio 1 is testament to his proven skills both on RTÉ Raidió na Gaeltachta and standing in on such shows as Today with Sean O’Rourke,” said Tom McGuire, head of RTÉ Radio 1.

“Sarah, Fionnuala and Katie - our three new presenters on Late Debate bring with them some truly excellent experience from the world of print, television and international journalism, and I’m delighted to welcome them all to Radio 1, and indeed to welcome Fionnuala Sweeney back to RTÉ from CNN,” he added.

The schedule changes will begin in February.