Retailers need to find their ‘theatre’ for town centres to survive

‘Non-essential’ shops will be busy today, but the power of online is more potent than ever 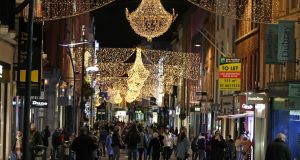 My abiding memory of Lockdown 2.0 will be racing down to delivery vans parked by the gates of my Dublin apartment complex as the joy of receiving a “non-essential” purchase (essential to me) mingled with unexpected camaraderie.

Anybody who assumes online shopping is an anti-social activity hasn’t encountered the phenomenon of time-pressed drivers nearing hundreds of flats, chain-ringing a modest horde of recipients within them – sometimes making two calls simultaneously – and then waiting mere seconds as we, the names on that day’s labels, emerge from a dozen blocks in various degrees of dress.

“Look at us, all running to get our parcels,” a girl I’d never seen before said as we converged on one magic van, laughing at what our lives had become.

Today, the Republic’s non-essential shops – a descriptor not even the most knowingly frivolous of retailers would choose – reopen their stiffened doors, and city centres and towns around the country will be visibly busier than they have been in six weeks.

Consumer spending levels this Christmas are expected to be nearer a boom-time-bonanza vibe than an uh-oh-recession one and now the bricks-and-mortar guys are back with their extending opening hours to stake a belated claim to the spoils.

Whether they can, or whether too many of this season’s gifts and self-gifts are already piled up in the nation’s wardrobes, is the kind of cold hard prediction I’m unwilling to make. Either way, it is impossible to miss the low cloud hovering over the retail sector at the business end of a year that has brought an extraordinary acceleration in online shopping.

The first lockdown was a period of shock, paranoia and packages stuffed between gate spikes (for socially distanced handovers). The second has, for many, been all boredom and planning for brighter times, starting with military levels of festive organisation. But online shopping is not just for Christmas and some of the physical trade lost to the infinite array of e-commerce merchants may never come back.

This, combined with the slow return to offices, creates a real danger of “shuttered, derelict” areas forming in Irish towns and cities, as Retail Ireland director Arnold Dillon concluded at a Public Relations Institute of Ireland virtual event on what lies ahead.

Some retailers that built their success on actual shops with tills and changing rooms – maybe even toilets – have also developed snazzy online operations, of course. But the more the latter become their saviour, the more they might wonder if the expense of their leases is still justified. If the answer is yes, their next task must be to work out what they can do to make their shops nice places to be, not just nice places to buy from.

“Experiential” is a word that has been surfacing for so long in conversations about retail that by now it is less of a buzzword, more part of the low background hum. It has become the kind of term that can be marked off bingo cards at conferences, where its mention will invariably annoy retailers sick of hearing how the installation of a coffee kiosk will fend off the turnover-destroying likes of Amazon.

Experiential retail is any kind of in-store shopping environment that differentiates the process from one-click ordering and provides more than “just anodyne shelves”, as marketer Colin Gordon put it to me recently.

We have all been in stores adept at the “theatre” of retail: the chocolate specialist with circulating taster trays to promote experimentation, the cosmetics seller with thoughtful wash basins to encourage sampling, the painfully cool café that dazzles its protein-ball clientele by placing stylish homewares in their line of vision. They all try to assault our senses and appeal to our self-image, distracting us from the damage we do to our finances and persuading us to visit again.

Alas, the only theatre in shops for much of 2020 has been the “Covid theatre” of mask-wearing and sanitation stations. The average shopping “experience” has been utterly recalibrated, with even bog-standard trips to bog-standard supermarkets transformed into quasi-social adventures or perilous exercises in dread. It’s difficult, and unwise, to drop a song-and-dance into the middle of this. Department store carollers will regretfully have to sit one out.

In the meantime, the world of online retail has its own tricks – personalised packaging, free samplers added on checkout, invitations to pick-and-mix colours or flavours – that make customers feel warm inside and don’t involve slashing the price.

Not every white van on the roads is an Amazon van. The Covid-19 grimness will end eventually and retailers will be able to ditch their tally counters and let everybody in without requiring them to swaddle their faces. But the impression I get when I’m in one of the few surviving record stores – that this is a museum, not a shop – has struck me when I’m in other retail outlets, too.

Certainly, the woes of fashion empire Arcadia bode further ill for the vibrancy of several Irish retail centres. Topshop, its flagship brand, was rarely afraid to try new things in-store. It just turns out none of those things can compensate it for the drag of maintaining prime real estate while being a distant also-ran online.

Realistically, it might not be individual shops, but entire streets that are on track for an “experiential” future. Rather than discovering a nail bar in a corner of a clothing outlet, passers-by will instead find the unit fully occupied by a salon or some other non-retail company selling services that cannot be replicated online. What shops there still are may be shops by stealth.

So perhaps cafes will make a great post-Covid comeback after all. Until then, my neighbours and I will carry on homing in on the DHL rendez-vous point, excited to have some reason to be excited.