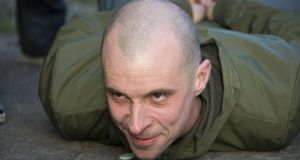 “Love/Hate” star Tom Vaughan-Lawlor: its production company, Octagon Films, is going to the High Court with a German investor.

Octagon Films, the production company that has been embroiled in a High Court drama with a German investor, reported a drop in profits last year, newly filed abridged accounts show.

The company, controlled by film producers Morgan O’Sullivan and James Flynn, reported accumulated profits of €161,782 for the 12 months to end-September 2017. This compares to profits of €298,494 a year earlier.

Founded by Mr O’Sullivan, Mr Flynn and Juanita Wilson, Octagon is a production company that has been involved in over 70 feature films and television series.

Among the Ardmore Studios-based company’s biggest successes are Love/Hate and The Borgias. It was also behind Calvary, the John Michael McDonagh directed movie that starred Brendan Gleeson.

The company was recently involved in a court action over the alleged diversion of funds when Berlin-based W2 Filmproduktion Vertriebs sued Mr O’Sullivan and Mr Flynn.

W2 claimed it had lost estimated revenues of €25 million in relation to activities of Octagon, in which W2 has a 49 per cent stake. The case is due to be heard in the High Court in November .