Troubleshooter Kieran Mulvey to join board of troubled INM 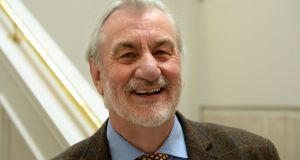 Kieran Mulvey was most recently in the news when he mediated talks between Ryanair and a group of striking pilots. Photograph: Dara Mac Dónaill

Industrial relations troubleshooter Kieran Mulvey is set to join the board of Independent News & Media (INM) as a non-executive director.

The troubled publisher of the Irish Independent newspaper confirmed on Wednesday that its biggest shareholder, businessman Denis O’Brien, had nominated Mr Mulvey as a non-executive director.

As Mr O’Brien has nominated Mr Mulvey, the board has determined that he is not independent according to criteria set out in the UK corporate governance code, generally followed in the Republic.

“INM is currently actively engaged in securing a further candidate for appointment to the board to restore compliance with the constituent provisions of the code,” a statement said.

Mr Mulvey was most recently in the news when he mediated talks between Ryanair and a group of striking pilots. Those talks ended in agreement last week and pilots are due to vote on proposals for settling the dispute.

He rose to prominence as the head of the Association of Secondary Teachers of Ireland, one of the more powerful education trade unions in the Republic, before going to work for the various State industrial relations bodies.

This is the first time that he has been appointed to the board of a stock exchange-listed company.

He is on the boards of University College Dublin, the Independent Radio and Television Commission and the National Economic and Social Council.

Mr Mulvey is chairman of Sport Ireland, which channels State funding to sports bodies, and Adare Human Resources Ltd. He is treasurer of the International Foundation for the Protection of Human Rights Defenders.

He is joining the INM board at a crucial time. The State’s director of corporate enforcement, Ian Drennan, is seeking to have the High Court appoint inspectors to investigate the company.

While Mr Mulvey built his career in industrial relations, he has clashed with trade unionists, most recently with Siptu president Jack O’Connor during the 2016 strike by Luas drivers in Dublin.

Sources say that Mr O’Brien would be unlikely to have nominated him to the INM board unless the two had some form of relationship. It is thought that they know each other through Mr Mulvey’s involvement Sport Ireland, which provides funding to the Football Association of Ireland, which in turn also enjoys Mr O’Brien’s financial support.