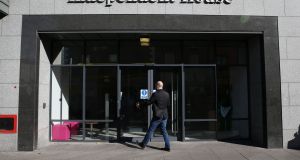 The business model for local newspapers is “broken” and the future of Celtic Media’s seven titles is best protected by being part of a larger company, its chief executive Frank Mulrennan has told an Oireachtas committee.

“The reality is we are faced with a broken business model for local newspapers and, dare I say it, newspapers,” Mr Mulrennan told the Joint Committee on Communications, Climate Action and Environment.

Mr Mulrennan asked the committee to ignore what he called the “considerable noise” about the proposed deal, which he said was “nothing to do with the job security of my colleagues”.

Mr Mulrennan said the future of the loss-making south Meath publication Forum was in doubt and that redundancies would ensue if the sale to INM did not proceed.

The National Union of Journalists (NUJ) opposes the deal and has called on Minister for Communications Denis Naughten to block it.

NUJ Irish secretary Séamus Dooley said it would do further damage to the “precarious” state of media plurality in Ireland. The union is concerned that the deal will extend the market influence of Denis O’Brien, the owner of the Communicorp radio group and INM’s largest shareholder.

He said the committee should question INM on its failure to honour pension commitments to its staff and reminded its members that they were entitled to interrogate the media group on its editorial structures.

Mr Dooley said he did not believe INM chief executive Robert Pitt would be interested in buying “a basket case” of a company.

In his opening address, Mr Pitt said the proposed deal would secure the future of the seven titles and that they would retain editorial independence.

Industry consolidation in general was vital, Mr Pitt said. “Consolidation is the only real means to ensure the continuation of many titles, the protection of jobs and indeed the survival of newspapers.”

Mr Pitt said there had been a 62 per cent decline in print advertising revenues in the Irish newspaper industry since 2007 as well as a 39 per cent decline in circulation volumes over that period. Redundancies continue to occur across the industry, he said.

“The existence of several titles is now under threat. This is also a fact of life in our industry,” he said.

Celtic Media would benefit from the centralisation of back-office functions and infrastructure, allowing it to continue to produce newspapers despite falling revenues, he said.

Mr Mulrennan, a former business editor of the Irish Independent, led a management buyout of Celtic Media when it went into receivership in 2012. He is its largest shareholder, while 25 per cent of the equity is held by its editors and sales managers.

INM approached Celtic Media about a takeover in April 2016, and the proposed acquisition was announced in September. In November, the Competition and Consumer Protection Commission ruled that the deal would not lead to a substantial lessening of competition in any market for goods.

The Minister has now referred the deal to the Broadcasting Authority of Ireland for a full review on media plurality grounds. The Oireachtas committee, chaired by Fine Gael TD Hildegarde Naughton, has been asked to make a submission to the review.

Dr Colum Kenny, who sat on the advisory group on media mergers set up in 2008, said the matter was one of principle, not personalities.

It was possible that the formation of larger media companies might be in the public interest, he said in response to Mr Mulrennan’s comments. “The difficulty here is that the devil is in the detail.”

The committee and its invitees had been asked to make observations without access to the full facts, Dr Kenny said.

Concentration of media ownership in Ireland poses a “high risk” to diversity of opinion, according to a 2016 study prepared for the European Commission by the Centre for Media Pluralism and Media Freedom. The Irish research was led by Dr Roddy Flynn.

Dr Flynn told the Oireachtas committee it was “striking” that recent media mergers had not been subject to a full investigation.

He suggested improved public media funding, not confined to broadcasting, could provide a third answer.