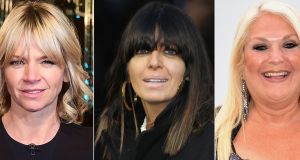 Zoe Ball, Claudia Winkleman and Vanessa Feltz, who are among the highest-paid BBC stars in 2018/19. Photograph: PA/PA Wire

Female presenters at the BBC were among the most prominent beneficiaries, while Irishman Graham Norton came in as third highest paid.

The broadcaster increased the wage bill for its on-air talent by almost four times the rate of inflation, and has faced criticism for scrapping free television licences for two-thirds of Britons aged over 75.

The BBC paid the almost 30,000 people and organisations who appeared on its TV and radio shows in the year ending March 2019 a total of £158.6 million, an increase of 8 per cent on the previous year.

More than £18 million went to 75 star presenters who earned more than £150,000 (€167,245). Of these, 30 were women, a record for the broadcaster that had only 24 per cent of women among its top earners two years ago when it was first forced to publish pay figures as part of its new royal charter agreement with the government.

The BBC said the rising cost of talent was in line with the extra £240 million it spent on programmes in the past year, arguing spend on presenters was down as a proportion of overall spend on TV and radio shows.

However, its pay disclosures do not include payments made by BBC Studios, the broadcaster’s wholly-owned independent subsidiary, which produces programmes such as Strictly Come Dancing. A UK parliamentary committee said this was an effective “loophole” in order to avoid disclosing salaries of top talent.

The BBC, which is under investigation by the Equality and Human Rights Commission for alleged pay discrimination against women, said a “reduction” in the number of men earning more than £500,000 had been among its priorities.

The broadcaster was criticised for paying talent more while saying it could not afford to take over the subsidy of the licence fee for those over 75, which currently benefits 4.5 million households in the UK and costs about £750 million.

David Clementi, BBC chairman, dismissed the criticism. “If we employed no stars that would save around £20 million, a fraction of the £750 million a year, a figure that will rise, which paying the concession for all over 75 would cost”. He also blamed the government for the widespread anger caused by the decision to restrict the subsidy. “It is not true that the BBC is seeking to end this concession,” he said. “It was the government that ended the funding and not the BBC.”

The BBC said its income from the licence fee fell by £180 million to £4.88 billion during the year.

Three women were among the top 11 paid presenters, which was all-male in previous years. Claudia Winkleman, host of a BBC Radio 2 Sunday show, Zoe Ball, who hosts a breakfast show on the same station, and Vanessa Feltz, who runs a daily London radio programme, were all among the BBC’s highest earners.

BBC sports presenter Gary Lineker retained top spot, earning up to £1.75 million, with the Radio 2 breakfast show host Chris Evans, who left the corporation in December, being the only other person paid more than £1 million. The best-paid female sports presenter was Gabby Logan, who earned up to £295,000.

Several male presenters, including John Humphrys, Huw Edwards and Nicky Campbell, took pay cuts last year, after figures revealed big discrepancies between male and female staff. Mr Humphrys, who in the year ending 2018 made up to £410,000, earned up to £295,000 in the past year. Andrew Marr took a slightly smaller pay cut of about £15,000, making up to £395,000 in the past year.

Sarah Montague said last year she was “incandescent with rage” after she found out she was the only one of the Radio 4 Today programme hosts to earn less than £150,000. Ms Montague, who moved to the station’s lunchtime programme World At One last year, earned up to £245,000.

Tony Hall, BBC director-general, said the broadcaster had “turned the corner on gender pay”. “The task is not complete, we are not complacent, but we are well on our way,” he said.

The median gap between the pay of women and men at the organisation dropped to 6.7 per cent, down from 7.6 per cent the year before and 9.3 per cent in 2017. The BBC said pay differences between men and women in each salary band was less than 3 per cent.

The BBC’s executive committee in the past year expanded from 10 to 15 members, pushing up the pay of board members and directors by 20 per cent to £5.4 million. Tim Davie, the chief executive of BBC Studios, earned the most among senior executives, making £642,000, including a £200,000 performance-related bonus. In comparison, Mr Hall made £475,000, the same as last year. – Copyright The Financial Times Limited 2019