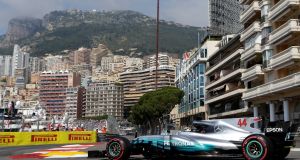 The series will have “exclusive access to the world’s fastest drivers”. Photograph: Reuters/Max Rossi

Netflix is to produce a season-long series on the 2018 FIA Formula One World Championship that will look under the bonnet of the multibillion-dollar business.

The entertainment streaming company is to collaborate with Formula 1 for the series, which is to be screened in early 2019. Netflix has commissioned 10 episodes for the season.

In a statement, Formula 1 said the series will be “the first to truly immerse the audience inside the cockpits, the paddock and the lives of the key players” in the sport.

Filmed and produced by Box to Box, the company which produced the Senna film, the series will have “unparalleled and exclusive access to the world’s fastest drivers, team principals and owners, as well as Formula 1’s own management team”.

“The production team will film and reveal the intense fight for the heart, soul, and direction for the future of this multibillion-dollar business,” it said.

This series will be executive-produced by Academy-Award winner James Gay Rees (Senna) and Paul Martin. Sophie Todd will be the showrunner.

Formula 1 managing director of commercial operations Sean Bratches said the sport was “actively repositioning” from a motorsport company to a media and entertainment brand.

“The agreement with Netflix serves to chronicle the fascinating story of what transpires behind the scenes during a grand prix season,” he said.

“This is a perspective of the sport that has yet to be unveiled to fans around the world. This series will unleash a compelling vantage point to the sport that will delight fans and serve as a catalyst to entice new fans.”

Formula 1 director of media rights Ian Holmes said the collaboration “represents a new way of capturing our sport in all of its exciting aspects”.

“We are delighted to welcome a Netflix original to Formula 1, a brand which has screened so many successful productions,” he said. “This collaboration represents a new way of capturing our sport in all of its exciting aspects.

“There is nothing like F1, its layers of engineering complexity, allied to the enormity of human endeavour required to get through a Grand Prix season.

“The chance to present our sport through Netflix, to their worldwide audience, in an original and unique format, is something that we are very much looking forward to. This is a tremendous opportunity to showcase F1 and attract new fans to the sport.”

Coronavirus: The online scams, apps and trends you need to know about during the pandemic 02:45
Brighten up your stay at home experience with artwork from Behance 01:03
Precipitous revenue slump, Deliveroo goes convenient; and data protction fears 00:22
Finance ministers gather as fears grow even the future of the euro zone is at risk 20:50
Oceans of learning when you dive into the marine website 19:04
Search executive
jobs on irishtimes.com