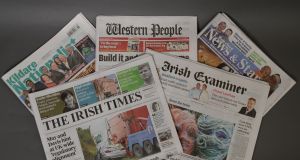 A phase two investigation into the proposed acquisition of the publishing and media interests of Landmark Media Group by The Irish Times DAC has been launched by the Competition and Consumer Protection Commission (CCPC).

In December last year, The Irish Times DAC agreed a deal to acquire certain assets of Landmark for an undisclosed sum.

Landmark’s interests include the Irish Examiner national newspaper and the daily Evening Echo. There are also six regional titles – the Waterford News & Star, the Western People, the Carlow Nationalist, the Kildare Nationalist, the Laois Nationalist and the Roscommon Herald.

Its radio assets comprise a 75 per cent stake in WLR in Waterford and regional station Beat and a 17.6 per cent holding in Cork local station Red FM. Landmark’s website interests comprise Breakingnews.ie, Irishexaminer.com, Recruitireland.com, and 75 per cent of Benchwarmers.ie.

Following a preliminary investigation into the transaction, the CCPC has found that further analysis is required to establish if the deal could lead to a “substantial lessening of competition in any market for goods or services in the State”.

On Thursday, the CCPC said it must make a final decision on the proposed transaction before August 1st.

That deadline could change if the CCPC requires more information about the transaction.

“The decision to enter into a phase two investigation is disappointing,” said Liam Kavanagh, The Irish Times managing director.

“We look forward to continuing the process of engagement with the CCPC with a view to getting clearance for the proposed acquisition as quickly as possible,” he added.