Netflix estimated to be watched in over 500,000 Irish homes 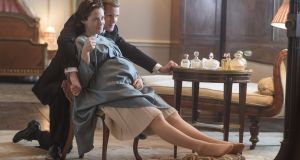 Netflix is used by at least 500,000 Irish households, the findings of a survey by communications regulator Comreg indicate.

More than two in five, or some 42 per cent, of the households questioned for Comreg’s Ireland Communications Survey 2017 said they accessed the television streaming platform.

Netflix itself does not publish subscriber numbers on a country-by-country basis, and the precise popularity of its service here can only be estimated.

The company also does not release any viewership numbers, meaning the audience of high-profile original series such as The Crown, Stranger Things and Orange is the New Black is unknown.

But if 42 per cent of Ireland’s 1.24 million fixed residential broadband subscriptions were to be used to access Netflix, in line with the survey sample, that would suggest a user base here of about 521,000.

As two of Netflix’s pricing plans allow for content to be viewed on more than one screen simultaneously, a certain amount of “piggybacking” on subscriptions between households is likely to be taking place.

The company, which began as a DVD-mailing service, has 118 million subscribers worldwide, about 63 million of which are located outside the US. The company has found its way into half of all US broadband households, according to market research firm Parks Associates.

In January, Netflix reported that it had a “beautiful” fourth-quarter, including a record pace for international subscriber additions.

Earlier this month, it agreed a deal with Sky, the largest pay-television provider in the Republic, that gives customers of Sky’s premium Sky Q service direct access to Netflix content, with Netflix shows displayed alongside those of Sky on the latter’s main menu. The service is also promoted to Virgin Media users in Ireland as part of a wider partnership agreed with Virgin parent Liberty Global in 2016.

Both moves will have boosted Netflix’s presence in Ireland, where the Californian company launched in 2012.

Comreg’s research, conducted by Ipsos MBRI among 1,519 households at the end of 2017, found that usage of Netflix was much more frequent among younger age groups, with 56 per cent of 15-34-year-olds saying they accessed it compared to just 11 per cent of people 65-plus.

Some 11 per cent indicated they were customers Sky’s Now TV service, which launched in Ireland last April, while 5 per cent said they watched Amazon Prime.

Although only 29 per cent households have a smart (connected) television, the majority expect that they will own one in five years’ time, the survey found.

1 Hurrah for the companies giving staff more time off
2 RTÉ to seek 70 voluntary redundancies as ‘large costs’ beckon in 2021
3 How long can Government afford to keep State pension age at 66?
4 ‘We lost money on our planned wedding in Spain. Covid saw to that’
5 Start-up Loanitt raises €570,000 as it looks to double headcount
6 Covid-19 will worsen shortage of accountants, says CPA Ireland
7 Aryzta to pursue asset sales as takeover talks fail
8 ‘Brexit readiness’ tool launched for Irish business amid trade talks impasse
9 In praise of Gogglebox Ireland, an essential service in all but name
10 Ireland pays more than €400m in interest on UK bailout loan
Real news has value SUBSCRIBE