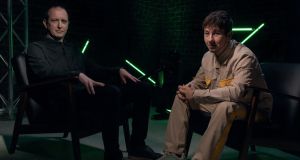 Maximum Media, the company behind the online brand JOE, is launching an Irish version of its Unfiltered interview series presented by journalist Dion Fanning.

The series, which runs as both a podcast and YouTube video, has been a success in the British market where it has been hosted in its first year by former Newsnight presenter James O’Brien from talk radio station LBC.

The Irish version, Ireland Unfiltered, will be a weekly show “with some of the biggest names in Irish entertainment, sport, politics and media”, it said.

The first episode features Dublin actor Barry Keoghan, who has appeared in the films Black 47, Dunkirk and The Killing of a Sacred Deer.

The show, which is produced from Maximum’s Dublin studio, is backed by a commercial agreement between the company and Carlsberg, which has a product called Carlsberg Unfiltered. The deal was arranged by the media agency Carat, part of Dentsu Aegis Network.

“What we know from Unfiltered with James O’Brien, which has been a huge hit with JOE’s audience, is that there is a massive appetite for long-form, honest interviews that do much more than just scratch the surface,” said JOE content director Paddy McKenna.

Maximum Media, which was founded by Niall McGarry in 2010, has been adding to its roster of audio and video productions in recent months. Last week, it launched a new rugby show, Baz and Andrew’s House of Rugby, presented by Barry Murphy and Andrew Trimble, with Diageo’s Guinness signed up as commercial partner.