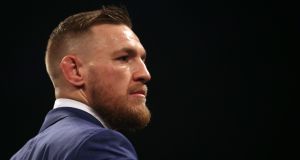 Conor McGregor’s lawyers argue the requests are designed to pressure him into settling the case. Photograph: Scott Heavey/PA Wire

Mixed martial artist Conor McGregor is fighting a legal battle in the US to avoid disclosing his sensitive financial data – including details of tax returns, his income and wealth – to a security guard suing him for personal injury.

William Pegg, who worked at the MGM Grand resort in Las Vegas, is pursuing Mr McGregor for launching cans of a soft drink into a crowd at a fiery pre-fight press conference in 2016, ahead of his rematch with Nate Diaz.

Mr Pegg alleges a flying can injured his back and has taken a case in a Nevada court. He wants to force Mr McGregor to give a deposition – sworn testimony delivered in person prior to a trial – about his wealth, to help calculate damages.

This has sparked a flurry of legal activity in recent weeks, as Mr McGregor’s lawyers try to prevent the disclosure of his tax and other data, which they say is designed to embarrass and “harass” him over his “celebrity status”.

They also argue it should be obvious that Mr McGregor is rich enough to pay up if he loses the case, and therefore shouldn’t have to disclose his finances. The fighter is said by Forbes to be worth close to $100 million.

The security guard wants Mr McGregor’s “complete federal tax returns for the last three years”, which the Irish man rejects as a breach of privacy. His lawyers argue the requests are designed to pressure him into settling the case.

Mr Pegg also wants details of how much the fighter is paid by his Las Vegas company, McGregor Sports and Entertainment LLC. He wants its tax data, including how much tax the fighter pays on payments to himself by the company.

Mr Pegg also wants full details of Mr McGregor’s UFC contract and payment for the Diaz bout, which is estimated to be as high as $15 million, including his cut of pay-per-view revenues.

Mr Pegg claims Mr McGregor has financially exploited the infamous can-throwing incident by using mocked-up images of it to promote his MacMoji app. Therefore, Mr Pegg also wants details of the fighter’s earnings from the app.

He also wants the Irish man’s credit card and bank statements. Mr McGregor’s lawyers have rejected most of Mr Pegg’s demands, but a judge on Monday refused to completely block Mr Pegg’s requests via a “protection motion”.

Mr McGregor had previously suggested he would give his deposition last Thursday. Mr Pegg alleges he “didn’t show up” as arranged and has now asked the judge to strike out his defence and award damages.

The two sides were still wrangling this week over what financial information Mr McGregor would have to disclose. The fighter’s representatives made no response to a request for comment.