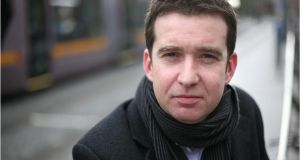 Mark Little: was an RTÉ journalist and current affairs presenter before leaving to set up Storyful, which he sold to Rupert Murdoch’s News Corp for €18 million in 2013. He served as an executive at Twitter.

Mark Little’s digital news venture Neva Labs has been renamed Kinzen and is inviting people to test pre-release versions of its app before its official launch in January.

Kinzen will be “a news community shaped by the conscious choices of its members, rather than the worst instincts of a crowd”, according to the company, which hopes that users will pay €5 or $5 a month for what it says will be a better digital news experience.

“We’re not going to save journalism. Others can promise that,” said Mr Little, Kinzen’s chief executive. But the app will allow users to control the technology, rather than the other way round, he said.

Kinzen, which now employs 12 people, has spent 2018 exploring how Facebook or Twitter would function for news consumers if it was being built today.

“If we could go back and do right all the things they have done wrong, what would that look like?” Mr Little said.

Users will be prompted to offer feedback on each article drawn from the open web that they read via the app, but Mr Little said this wouldn’t lead to a “creepy” system of personalisation or “stalking” used by some apps.

“The big difference between us and other aggregators is that we don’t go in for the kind of scary personalisation where we’re going through your browser history.”

The app will help people “escape endless scroll”, liberate them “from the shallow metrics of claps, clicks and likes” and would be free of “hidden manipulation”, he added.

Testers will be asked to trial the app from mid-November and participate in Kinzen’s pre-launch research, while the company will form a “network of curators” that will “help lead our members toward valued sources and shared facts on the topics that matter to them”.

It is also seeking “patrons” to donate €30/$30 or more to back the company, in exchange for which they will receive six months access to its subscription services after they become available in January.

Kinzen is otherwise funded by Mr Little himself, technology entrepreneur Ray Nolan and another private investor. It has support from State agency Enterprise Ireland and a grant from Google’s Digital News Initiative, which is being used to develop a Kinzen “plug-in” for publishers that partner with it.

The company plans to “build revenue-generating partnerships with publishers who want to break their dependence on social platforms and advertising revenue”. Mr Little says he is “excited” by the interest he has received to date from smaller, local publishers.

It has also received an investment from the Civil Media Company, a start-up that aims to bring blockchain technology to journalism.

In total, some €1.5 million in funding has been raised. Kinzen notes on its website that none of this has come from venture capital (VC) companies.

“One of the mistakes that has been made by well-meaning media companies has been to take on too much VC funding at the beginning,” said Mr Little. This can lead to “insane targets” for growth or pressure to “flip the company”, he said, which he does not plan to do. Kinzen might raise VC finance in the future, he added, but “right now, it is an advantage” to have private investors.

Mr Little was an RTÉ journalist and current affairs presenter before leaving to set up Storyful, which he sold to Rupert Murdoch’s News Corp for €18 million in 2013. He later served as an executive at Twitter.

Ms Kerr, the chief operating officer, is a former political journalist who was managing editor at Storyful and global head of journalism partnerships at Facebook. Mr Watson is Kinzen’s chief technology officer, a role he previously held at Storyful. The company’s publisher strategy will be led by Colin Doody, a former senior business development manager at the Wall Street Journal.

The name Kinzen is an amalgamation of “kin” and “zen”. Mr Little said this reflected the dual nature of the app, with “zen” recalling “citizen” and “kin” meaning family, suggesting that users will have agency but also be part of a community.

“That sounds very existential,” he admitted to The Irish Times.

1 ‘No demand... because there are no people’ at well-known Dublin pub
2 Revised help-to-buy scheme opens for applications
3 AIB concedes Covid mortgage policy was ‘regrettable’
4 Harvey Norman targets Irish property developers
5 ‘Saudi Arabia is where the opportunities will happen in future’
6 ‘Humble’ Airbnb going back to basics
7 How to . . . move (almost) everything to your new phone
8 Buying a second home now that we work from home
9 Nearly 30,000 could lose pandemic payment if they do not confirm eligibility
10 Battle for TV streaming service subscribers set to intensify
Real news has value SUBSCRIBE