It is perfectly acceptable to wear your passion on your sleeve 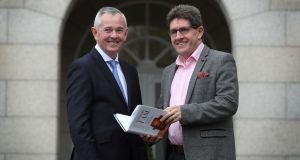 The author, Conor Kenny, with author and journalist Paul Kimmage, at the launch of Kenny’s book “It’s Who I Am”. Photograph: Robbie Reynolds

A frustration when interviewing senior business people is that, very often, they are too well schooled by consultants for their own good. They can become so preoccupied with keeping “on message” that they lose all sense of spontaneity.

This often ends up obscuring the most interesting thing about many of them: the very personal sense of passion that drives them.

How ironic, then, that a new book that takes a satisfying deep dive into the passion and driving forces behind many well-known public figures, including some senior business people, was written by a prominent management consultant.

It’s Who I Am, authored by Conor Kenny, the son of the late management guru Ivor Kenny, interviews in depth a range of personalities, from Brent Pope to Finbar Furey. Kenny seeks out how they discovered “their purpose and passion”.

Kerr’s story is already well known, including his recent brush with cancer. But he tells it here with such self-deprecation, candour and phlegmatic good humour that it makes you wonder if he forgot he was being interviewed at all.

He reveals that he doesn’t consider himself “a terribly eloquent broadcaster”, and speaks of a “talent deficiency”. Often, if someone speaks in such terms, it is because they lack confidence in themselves.

But it becomes apparent that Kerr can talk this way precisely because he is so confident about what comes naturally to him, and what doesn’t. He stuck at it, and got better. Kerr’s passion, we come to understand, is to improve things.

Ó Céidigh’s tale is also highly readable, as is McGann’s, including his mercurial ride at Smurfit Kappa, recounted here in more detail than he has told before.

He skimmed too quickly, however, over his stint as a director of Anglo Irish Bank when the bank collapsed, which is a pity. There are many lessons that others within the business community could learn from his experience there.

And a passion for learning is, perhaps, the most noble passion of them all.