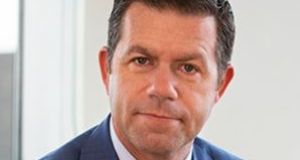 Teneo Holdings, which provides consulting services to some of the world’s biggest companies, was set up in 2011 by Declan Kelly (above), Paul Keary and Douglas Band, once a top adviser to former US president Bill Clinton. File photograph: Teneo Holdings

Irish businessman Declan Kelly, brother of Labour Party TD and former minister Alan Kelly, is set for a major financial windfall from the flotation of his New York-based business that he co-founded just five years ago.

Reports in the United States suggest Teneo Holdings, which provides consulting services to some of the world’s biggest companies, is eyeing a stock market IPO valued at up to $1 billion (€890 million).

The company was set up in 2011 by Mr Kelly, Paul Keary and Douglas Band, once a top adviser to former US president Bill Clinton.

Mr Kelly also had ties to the Clintons, as US economic envoy to Northern Ireland when Hillary Clinton was secretary of state.

Teneo has 575 employees around the world, including in Ireland, and has been on an expansion spree recently.

In July, the company announced its takeover of Dublin-based PSG Communications, a PR and sports sponsorship agency with 55 staff.

In June, it announced that former Ireland and Lions rugby captain Brian O’Driscoll had joined its sports division as a senior adviser.

According to the Wall Street Journal Teneo, which has backing from private equity group BC Partners, could go public as early as next year.

Other options under consideration include a merger with another firm or a sale of some of Teneo’s units.

Teneo generally charges monthly retainer fees of $100,000 to $300,000 and its near 500 clients include multinational giants Xerox Corp and Coca-Cola.

Teneo did not respond to calls or an email from The Irish Times last night.

Mr Kelly comes from Tipperary and was a journalist in Ireland.