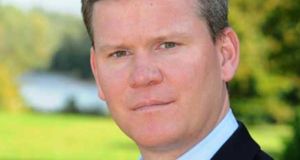 The Ireland Funds America has appointed David Cronin as its new president and chief executive. He takes over a role that was held until recently by Kieran McLoughlin, who has since been appointed as chief executive of Venture Wave Capital, an Irish fund manager.

Mr Cronin has worked in philanthropy for the past decade, raising and investing more than $100 million in his role as chief executive of UL Foundation, working closely with Chuck Feeney, Atlantic Philanthropies and the worldwide Ireland Funds. He is also a member of the Munster Rugby Commercial Board.

Mr Cronin will take up his role in early June. He described his appointment as a “genuine privilege”, adding that he was “absolutely committed to the future success of the Ireland Funds”.

Prior to his time in philanthropy, he was chief operations officer of Qumas, an indigenous tech start-up specialising in governance, risk and compliance management. It was acquired in 2013 by Accelrys.

Mr Cronin began his early career in New York, where he worked as an equities and options trader for Wall Street Access. He holds a Masters in International Business from Trinity College Dublin and is a graduate of UCC.

New York-based Irish hotelier John Fitzpatrick, who is chairman of the Ireland Funds America, said Mr Cronin has the “experience, energy and integrity” to ensure the future success of the fund.

“We are delighted to have secured a business leader of his calibre, who understands and reflects our core values and mission so intrinsically,” Mr Fitzpatrick added.

Commenting on the appointment, Sir Anthony O’Reilly, co-founder of the Ireland Funds in 1976, said: “The appointment of David Cronin as Ireland Funds President and CEO is an exciting development and we look forward to planning the next phase of our journey under his leadership. He has my heartfelt congratulations and support.”

University of Limerick Foundation chairwoman Loretta Brennan Glucksman said Mr Cronin made a “very significant contribution” to the foundation since he joined as CEO in 2008.

“During that time, he has played a key role in developing and managing strategic relationships with leaders in philanthropy, business, art, culture, politics and sport,” she said.

“While we will be very sorry to see David leave at this time, we want to express our deep appreciation for his work as CEO and for the strong legacy he will leave behind here in the University.”

University of Limerick president Dr Des Fitzgerald said it was “impossible to overstate” the importance of the foundation to the university and to the wider community in Limerick.

“As CEO David has overseen a very successful period of fund raising, partnership building and investment which has greatly helped the University to progress its mission,” he said.

The Ireland Funds was established to promote and support peace, culture and charity for Irish causes. It has chapters in 12 countries and has raised more than $600 million (€532 million).

Annually, the Ireland Funds hold about 150 events with more than 25,000 donors worldwide providing support of up to $30 million.

Last year, it emerged that the Ireland Funds was taken legal action against a former employee at its Dallas, Texas, office for the alleged embezzlement of funds. The case continues.