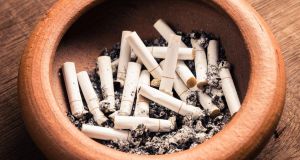 Simon Harris, the Minister for Health, has called for European Union intervention against certain tobacco companies that he believes are “undermining” a ban on menthol-flavoured cigarettes that was introduced in Ireland this month as a measure to prevent young people from taking up smoking.

The menthol market was estimated at up to 18 per cent of the total cigarettes market here, or about €252 million, before the introduction of the ban across the EU on May 20th.

Anti-smoking groups, including Ash Ireland, a part of the Irish Heart Foundation, have also strongly criticised moves by certain companies for allegedly “circumventing” the ban with replacement products that seek to exploit loopholes.

It singled out for criticism Philip Morris International, the maker of Marlboro, which has just introduced a new product onto the Irish market that it described to retailers as a “menthol blend without methylation”.

Philip Morris said it believes it is still in compliance with the ban because, it claims, the cigarette doesn’t taste of menthol when it is smoked. It also criticised any Irish retailers that are still illegally selling its old menthol Marlboro Green brand, which The Irish Times found available to purchase in a Dublin convenience store yesterday.

Japan Tobacco International (JTI), the Silk Cut maker that is ultimately one-third owned by the Japanese state, also argued that its new replacement brand, Silk Cut Choice Green, is in compliance with the ban, despite admitting it uses menthol flavourings in its manufacturing.

Rival tobacco companies that have chosen not to introduce substitutes for menthol cigarettes also criticised the moves by JTI and Philip Morris.

“We believe both the letter and spirit of the law is clear and as such we are not launching any cigarette brands or accessories with menthol-type properties,” said Simon Carroll, the Ireland country manager for British American Tobacco, whose subsidiary here is PJ Carroll.

JTI and Philip Morris both advertised their new brands as replacements or substitutes for their old menthol cigarettes to Irish retailers in the April issue of trade magazine, Retail News.

Philip Morris ran a full-page ad with a green coloured theme for a new product called Marlboro Bright, which it said was a “menthol blend without methylation”. It told The Irish Times on Friday that the new brand was a “non-mentholated traditional cigarette”, although it is clearly targeted at smokers who were previously smokers of menthol cigarettes.

JTI also ran a clutch of full-page ads for its offerings in the magazine. The company was recently criticised by anti-smoking campaigners in Britain for a publication about how to “navigate” the ban that was distributed to retailers by a trade publisher, “in association with JTI”. It was called “Making a Mint”.

“The regulations permit the use of flavourings such as menthol, vanilla and spice provided that the use of such flavourings does not produce a clearly noticeable smell or taste other than one of tobacco,” it said.

“We conduct robust internal testing processes to determine that the use of flavourings in our products does not produce a clearly noticeable smell or taste other than one of tobacco. All JTI tobacco blends continue to comply fully with the law.”

Mr Harris indicated yesterday that it was a matter for the State’s Environmental Health Service to determine if individual products meet the ban, and that the “effectiveness” of tobacco control legislation is kept under review.

“It is clear there are many tobacco companies adapting their products and undermining the objective of the [ban]. Minister Harris believes this should be dealt with at EU level,” said a spokeswoman.

Ministers in Germany also called for intervention this week in relation to flavouring products that are sold to consumers to add in the taste of menthol after purchase.

“We are not surprised that the tobacco industry has tried to circumvent the ban by substituting mint flavouring. When the industry fails to prevent public health policy measures from being enacted they frequently resort to other tactics such as court challenges,” he said.