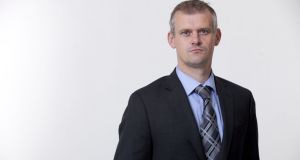 The news at Virgin Media Television is that there is now more news than ever – and it’s not all down to the Dr Tony Holohan show.

The broadcaster’s news operation has been reaping the benefits of investment made by its parent company back in 2018, allowing it to enter the biggest news story of the century with upgraded studio facilities, extra personnel and a stronger hold on the Virgin Media One schedule.

It turns out there’s nothing like a pandemic to prompt a surge in television news audiences. At one point in mid-March, RTÉ’s news audience was 200 per cent higher than it was the year before, with its Nine O’Clock St Patrick’s Day bulletin, delayed until 21.12pm by the Taoiseach’s special broadcast, watched by 1.3 million people (making it second only to Leo Varadkar’s address in the list of the most-watched programmes so far this year).

Although viewers still flock to RTÉ in a crisis (eight times as many people watched Varadkar on RTÉ One that night compared to Virgin), there has been room for Virgin Media News’s audience to swell, too. Between March 13th and May 6th, its News at 12.30’s average viewership rose by 47 per cent year-on-year and its News at 8 by 42 per cent. The 5.30pm bulletin is the focal point, however, with the first half-hour seeing a 70 per cent rise in its audience, and an even higher (almost 90 per cent) uptick among 15-34-year-olds. On May 1st, the News at 5.30 recorded its highest audience since 2010, Storm Ophelia and Emma specials excepted, averaging 310,000 viewers.

Mick McCaffrey, Virgin’s head of news and sport, isn’t seeing too much “Covid fatigue” among viewers since the peak. The News at 5.30, presented by Colette Fitzpatrick, still crosses the 30 per cent audience share mark, rather than its more standard 23-24 per cent level. It isn’t just that there are more people stuck at home, Virgin is claiming a greater-than-normal share of the viewers watching TV in that time slot.

The bulletin was doubled in length to cover the Department of Health’s daily press conferences and continues to run until 6.30pm on Mondays and Thursdays to match the new twice-weekly conference schedule. On the other days, it stays on until 6.01pm, rather than reverting to the old wrapping-up time of 5.53pm.

“In normal times, you would never consider putting news up against RTÉ’s Six-One. It’s such a juggernaut,” says McCaffrey. But it managed to average close to 130,000 viewers in that second half hour, helped by the “quite interesting” decision of RTÉ to keep live press conference coverage for RTÉ News Now.

“People were tuning in to see Tony Holohan,” says McCaffrey. Indeed, they were waiting for the chief medical officer, watching the bulletin when the scheduled conference start of 5.30pm would turn out to be more like 5.50pm.

With other programming cancelled or postponed, news has never been more important to the Virgin linear schedule. McCaffrey – a former newspaper journalist who arrived at the broadcaster in late 2016 from UTV Ireland after Virgin Media bought the latter channel – says his perception is that news was once considered more of a “regulatory obligation”. Certainly, when TV3 made cutbacks to cope with recession in 2008, one of its first moves was to end weekend news bulletins. They didn’t return for nine years.

“Now news is at the centre of everything we do,” he says, citing the risk of rebranding to Virgin, the “bold decision” to add an 8pm bulletin in 2018 and the momentum it built during the general election campaign. The newsroom has doubled in size during his tenure and now includes “about 20 journalists on the road”.

Among them is another UTV Ireland transfer, economics correspondent Paul Colgan, whose blunt March 13th explainer on the UK’s “deeply controversial” herd immunity approach (now denied by Downing Street) used “simple maths” to project 277,000 deaths in the UK if 60 per cent of its population was allowed to become infected. It has been viewed more than 2.7 million times through Twitter alone.

Meanwhile, reporter Zara King “really caught the moment” by asking Holohan at a late April conference when hairdressers would reopen, eliciting a joke from him in the process. “Zara was asking the question that every viewer wanted asked,” says McCaffrey.

Hiring people with proven social media skills has been “part of the recruitment strategy”, he adds. Two 2018 recruits from the radio sector were political correspondent Gavan Reilly, ranked the most influential Irish journalist on Twitter by PR company Murray, and eighth-placed reporter Richard Chambers.

“They bring viewers with them,” says McCaffrey. Virgin is now exploring ways of increasing its presence further on social media platforms including Instagram Stories and “the likes of TikTok”, because while it’s “really, really encouraging” to see more 15-34-year-olds tuning into its news bulletins, the challenge now is how to hold on to that younger, digital-loving audience.

As well as new viewers, Covid-19 has brought new logistics of news gathering. At the outset, Virgin and RTÉ news boss Jon Williams formally agreed to pool the filming of press conferences between them, because “there was no point in sending four people to a briefing, when you could send two”.

At Virgin’s home in Ballymount, there are no more than 11 people in the newsroom at any one time and there are two production teams who never meet throughout the day, the idea being that “if one team gets sick, the other team can still function”.

To take the pressure off the small team editing its news packages, McCaffrey has also bumped up the number of live pieces-to-camera by reporters, saying the “ultimate test” of this will be whether the viewer notices. If they have, it seems they don’t mind.