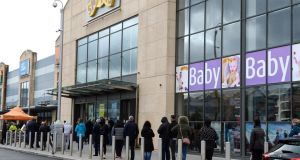 Irish marketers are “bullish” about the crucial fourth quarter, with brands ramping up their advertising activity in the expectation that consumers will seek “to bring a bit of joy into their lives” as Christmas nears.

Shenda Loughnane, group managing director of media agency group Dentsu Aegis Network Ireland, said its current forecasts were for 4 per cent year-on-year growth in Irish advertising spend in the fourth quarter. This compares with a 30 per cent year-on-year decline in the third quarter, a 50 per cent plunge in the second, and a flat first quarter after the Covid-19 outbreak obliterated what had been an upbeat start to 2020.

“The second quarter was the same for us as it was for every other industry – it was a bit of shock. Since then it has been rallying. For many brands it is a case of releasing the budgets they paused in the second quarter,” Ms Loughnane said.

“People need something to bring a bit of joy into their lives. Brands have seen that and decided to just get on with it.”

Many retail and telecoms brands have been able to respond well to the shift from out-of-home to in-home spending, as people take the “the reservoir of cash” previously destined for holidays and hospitality and reallocate it to homeware and better-quality food, said Richard Carr, chief executive of Accenture-owned creative agency Rothco and managing director of Accenture Interactive in Ireland.

“It is almost becoming a cliche, the K-shaped economy,” Mr Carr said, invoking the term used to describe different sectors’ diverging experiences of a recovery. “If you’re in the aviation business, there’s not a lot going on, but if you’re in retail, there is lots. The vast majority of clients are pretty bullish.”

While anxiety about the path of the pandemic remains high as Christmas approaches, “we are seeing that uncertainty in people spending earlier,” he added, citing last Monday’s queues outside Smyths toy stores in the wake of fears shops would be obliged to close.

“Globally, we think it will be the biggest Black Friday everywhere and probably the best Christmas as well,” Mr Carr said.

Accelerated rates of ecommerce, necessitated during lockdown by physical shop closures, will remain in evidence. “In effect, we have all jumped in something of a time machine and gone forward three to four years.”

David Field, interim chief executive of the Marketing Institute of Ireland, who has worked in senior roles in Brown Thomas and Eason, also reported a confident mood among marketers.

“From talking to members, they are quite bullish,” he said. “If you’re an SME, you are certainly more cautious, but otherwise the budgets for the fourth quarter and indeed next year are broadly where they expected they would be, and in line with last year.”

Brands are seeing “real value” in buying media space at the moment and can increase their share-of-voice with the ultimate aim of improving their market share, and in the absence of off-peak getaways, they will be marketing to “a winter with a full population”.

Mr Field said he would like to see Minister for Finance Paschal Donohoe introduce a tax credit for advertising expenditure similar to a measure in Italy in March. Ms Loughnane also said an incentive reflecting advertisers’ role in stimulating consumer demand would be a welcome element of Budget 2021.

Mr Carr said it was important that the budget as a whole brought some stability to consumers at a time when the economic outlook was in flux.

“A budget that brings clarity and certainty will be a successful budget. We don’t need any more surprises.”