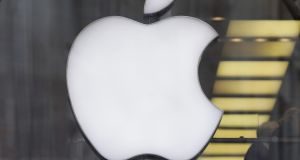 News of the decision by Apple went global this week, with reports on its decision not to invest in Ireland being carried in major publications in North America, Europe, the Middle East and Asia. Photograph: Yui Mok/PA Wire

IDA Ireland has said that Ireland has lost a “global calling card for the west of Ireland” by missing out on a $1 billion investment by Apple in Athenry, Co Galway, after the project became bogged down in planning delays and objections, according to a report in the Sunday Business Post.

News of the decision by Apple went global this week, with reports on its decision not to invest in Ireland being carried in major publications in North America, Europe, the Middle East and Asia, as well as influential more specialist publications such as AppleInsider, Data Economy, the Verge and TechCrunch.

“In the foreign investment space, the signalling effect is very important,” an IDA spokesman said.

“A large company investing in a regional location would have been a global calling card for the west of Ireland. Ireland is home to multiple large technology companies, and data centres in Ireland need to be seen as a part of an overall infrastructure that multinationals maintain here,” he said.

“Oftentimes, a data centre is part of a wider commitment that a company is making to Ireland,” he added.

Rabobank, the Dutch banking services company, is preparing to offload its residual ACC loan book in a deal that could push the stock of mortgages sold by Irish lenders to more than €15 billion, according to a report in The Sunday Times.

The news comes as AIB selected US private equity fund Cerebrus on Friday as preferred bidder for its Project Redwood portfolio of more than €1 billion of distressed commercial loans.

Ulster Bank has also pressed the button on the sale of €1.6 billion of mortgages that are deep in arrears.

The ACC sale will draw a line under Rabobank’s costly foray into Irish banking, which began with the acquisition of ACCBank from the State in 2002. Following heavy loan losses, Rabobank handed back its Irish loan licence in 2014 and transferred management of remaining loans to outsourcing specialist Capita.

House-builder Victoria Homes is to seek planning permission for 850 homes in south county Dublin, in what would be one of the State’s largest residential projects since the onset of recession, the Sunday Independent has reported. The planning application for the €375 million development will go straight to An Bórd Pleanála under the fast-track process. The homes are planned for the Glenamuck Road in Carrickmines.

Documents obtained by the Sunday Business Post reveal US computing giant Microsoft piled pressure on Ireland in a case over access to emails at the centre of a drug-trafficking investigation.

The drug case saw Microsoft face off with US government over demands that the tech firm give access to emails at the centre of the investigation, which are stored in Ireland.

Emails seen by the Sunday Business Post show that Microsoft complained at length about Ireland’s submission in the case, saying it had created “unnecessary confusion”, and that it then called on Ireland to “make its points more forcefully and clearly” and to “correct the record” on certain matters.

Ireland initially supported Microsoft’s case, but later changed its stance to neutral in documents filed to the US circuit and supreme courts.

A group of Irish investors, including Manchester United star John O’Shea, could be in line for a major windfall arising from the upcoming €300 million flotation of Tetrarch Capital, according to the Sunday Business Post.

O’Shea, who retired from international football last week, and his wife are shareholders in the holding company that was behind Tetrarch’s purchase of the City West Hotel in Dublin, which will be a key asset in the portfolio Tetrarch is set to float in the autumn.