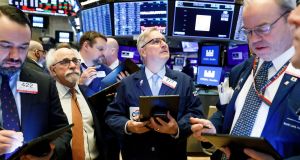 The S&P 500 and the Nasdaq hit record highs on Wednesday after US president Donald Trump said there were no American casualties in the Iranian missile strikes and that Tehran appeared to be standing down, sparking a relief rally in markets.

The news came in time for European shares to reverse earlier losses, ending higher on Wednesday after Iran indicated the overnight missile strikes “concluded” its retaliation to the US killing of General Qassem Soleimani.

The Iseq all-share index closed down half a per cent underperforming its European peers. There were relatively light volumes in the market on the day with a majority of stocks closing lower on the smaller Iseq 20 index.

Ormonde Mining was the biggest loser for a different reason, shedding 60 per cent of its value after it announced it had entered into a sale agreement for its 30 per cent interest in its key asset in Spain for €6 million. After 2.1 million shares traded, the stock had fallen to 1c. Davy analyst Job Langbroek said the price was “disappointing in the context of expectations” but that it “may be the best outcome” given news of additional funding to better exploit the asset.

There were few in the way of gainers although budget airline Ryanair edged higher as the price of oil dampened as the day went on. The stock closed up 0.17 per cent at €14.84.

The FTSE 100 ended roughly flat while the FTSE 250 tumbled 0.8 per cent as a steep fall in payment processing firm Finablr also weighed.

Shares in Irish oil explorer Petrel Resources shed close to 50 per cent to finish at 7.25p after the company said it was urgently seeking an explanation from one of its shareholders after a payment due for a tranche of shares failed to arrive on time. The company is also looking into recent share sales amid concerns there could have been a breach of a lock-in agreement.

Blue-chip NMC Health slumped 16 per cent and Finablr slid 18 per cent to a fresh low after a discounted share sale by major shareholders. Finablr’s unit Travelex separately confirmed it was hit by a software virus attack.

The currency trader, which also provides forex services for customers of HSBC, Barclays, Virgin Money and the banking arms of British retailers Tesco and Sainsbury, said on Tuesday a software virus identified on January 2nd was a ransomware attack.

Wood Group skidded 7.6 per cent after the UK’s competition watchdog said it would investigate the proposed sale of the company’s nuclear unit to Jacobs Engineering. Sirius Minerals soared 35 per cent to a near four-month high after Anglo American said it was in advanced talks to buy the fertiliser maker. Anglo shares ended flat.

Germany’s Dax outperformed regional bourses as the positive geopolitical development overshadowed an earlier data showing an unexpected fall in industrial orders in November in the country.

France’s Airbus, among the biggest boosts to the pan-regional index, rose 2 per cent as its US rival Boeing’s 737-800 jet belonging to a Ukrainian airline burst into flames shortly after take-off from Tehran, killing all 176 people aboard.

On the other hand, Boeing suppliers Senior, Safran and Melrose slipped between 0.1 per cent and 1.2 per cent.

The blue-chip Dow was trading just below its all-time high as Boeing fell 1.2 per cent.

Lennar gained 2.4 per cent after the number two US homebuilder beat quarterly profit estimates on the back of lower home prices and mortgage rates. Adding to the upbeat mood, the ADP National Employment Report showed private payrolls jumped by 202,000 jobs last month, much above the 160,000 rise expected by economists polled by Reuters. – Additional reporting: Reuters