US markets set to open at record high on vaccine hopes 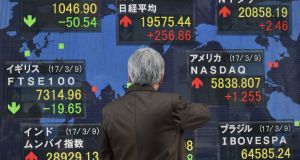 A man looks at an electric quotation board flashing numbers of the world’s stock markets, including the Tokyo Stock Exchange

The S&P 500 and the Dow were set to open at a record high in the first trading session of the year on Monday, building on a rally that has been powered by hopes of a vaccine-driven recovery in the global economy.

Wall Street’s major averages rounded off 2020 with strong gains as a wave of monetary stimulus and promising developments on the vaccine front helped the indexes recover from their sharpest contraction in decades.

On the vaccine front, Britain on Monday became the first country to roll out the Covid-19 shot developed by Oxford University and AstraZeneca.

“A lot of people that may have missed out or sold at the wrong time last year are now saying I want to get in. The coast is clear, the vaccines are coming, and they want to start to participate in the market,” said Thomas Hayes, managing member at Great Hill Capital LLC in New York.

“It is just the question of state governments now picking up the pace of vaccine administration.”

US vaccinations in 2020 fell far short of early government target of having 20 million people vaccinated by the end of the year. The government is contemplating giving some people half the dose of Moderna’s shot in order to speed inoculation.

Some investors are cautious about the pace of economic growth as US jobless claims remain stubbornly high, while a new round of business closures last month and the discovery of a new variant of the coronavirus have cast a shadow on the outlook.

All eyes are on the twin US Senate runoff elections on Tuesday in the battleground state of Georgia, which will determine control of the chamber and, effectively, the fate of president-elect Joe Biden’s agenda including rewriting the tax code, boosting stimulus and infrastructure spending.

“What you could see is potentially a loss of one seat but it will not flip the Senate ... the political climate will continue as is in which case we have a balanced government and a gridlock in the Congress which historically is very bullish for the stock market,” Hayes said.

Tesla shares rose about 2 per cent in trading before the bell to a record high after the electric-car maker reported better-than-expected vehicle deliveries in 2020, extending a meteoric rally that has seen the stock surge more than 700 per cent.

Shares of Goldman Sachs and Morgan Stanley rose about 1 per cent each, outperforming other US lenders, after Barclays upgraded its ratings on both stocks to “overweight”. – Bloomberg

3 The Irish Times Business Person of the Month: Peter Carroll

4 The Irish Times Business Person of the Month: Matt Cooper

9 Roll up, roll up: capitalism will drive cannabis legalisation in Ireland