US and European stocks rally in rebound from historic drop 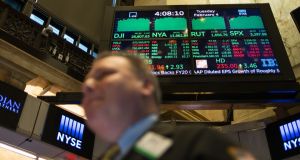 Global equities are heading for their worst week since 2008 as investors price in a severely weaker outlook.

US and European stocks made strong gains in frenetic trading on Friday, rebounding from a rout in global shares caused by spiralling concerns over the coronavirus outbreak.

Trading circuit breakers have been hit multiple times this week in both directions, underlining the scale of the market volatility. The Cboe volatility index - known as Wall Street’s “fear gauge” – this week jumped to its highest levels since the financial crisis.

Sentiment was boosted on Friday as global authorities stepped in with an attempt to cushion the economic damage caused by the coronavirus outbreak. Germany, Europe’s biggest economy, said it was prepared to deploy unlimited cash to companies hurt by the pandemic.

The EU said it was prepared to use emergency flexibility in the bloc’s budget rules as it pledged to do “whatever is necessary” to support the economy.

Daily moves of several percentage points have become commonplace in global markets during the past weeks, as traders grapple with the escalating economic disruption from the viral outbreak, while central banks offer up new measures to ease the flow of credit.

The People’s Bank of China on Friday cut reserve requirements for banks in a move to ease borrowing conditions for companies that have been disrupted during the past six weeks. Norway’s central bank cut interest rates, while the Bank of Japan bought billions of dollars of Japanese government bonds and the Reserve Bank of Australia injected A$8.8 billion (€4.8 billion) into the financial system.

The Federal Reserve on Thursday said it would inject trillions of dollars of short-term money into the financial system to address a serious disruption to the US government bond market.

US Treasuries slipped on Friday as part of the global shift back into riskier assets. The yield on the benchmark 10-year note rose 0.11 percentage points to 0.96 per cent. Yields move inversely to prices.

Securities watchdogs in Europe also moved to try to calm markets. Italian and Spanish market regulators banned bets against 154 stocks in an attempt to lessen the tumult in their equities markets. The short-selling bans are at present in effect for Friday’s trading session only.

Economic disruption across Europe is mounting as the virus spreads. France has urged its citizens to avoid travel and has closed schools; Belgium will shut schools, restaurants and bars later on Friday; and in Italy, which is suffering the most severe outbreak in Europe, the 60m population has been living under lockdown for much of this week.

Markets have reflected these extraordinary circumstances. The Stoxx Europe 600, which tracks the region’s largest companies, has dropped more than 30 per cent in less than a month, while government bonds have rallied as investors search for safe corners of the market.

Markets in Asia-Pacific staged wild moves on Friday, with Sydney’s S&P/ASX 200 swinging more than 12 per cent during the day before closing 4.4 per cent higher.

Japan’s Topix index closed 5 per cent lower after earlier trading down as much as 9 per cent.

Investors remained cautious about dipping their toes back into the market, said Masamichi Adachi, an economist at UBS in Tokyo. One trader in the Japanese capital said: “Nobody wants to hold any positions into the weekend.”

Elsewhere, China’s CSI 300 index of Shanghai and Shenzhen-listed stocks dropped 1.4 per cent while Hong Kong’s Hang Seng was off a similar amount. Both indices staged sharp recoveries from earlier losses.

“You are seeing the market function melting down, with no standard correlations between asset classes,” said Mr Adachi.

The European Central Bank on Thursday declined to join the Fed and Bank of England in cutting interest rates but announced a package of economic support measures. – Copyright The Financial Times Limited 2020