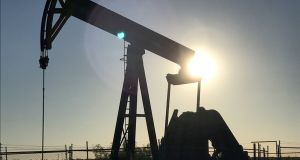 European shares edged up 0.1 per cent on Tuesday, but Italian stocks were a weak spot as the threat of a snap election grew, while earnings and deal-making sparked some large individual moves elsewhere.

Wall Street was lower in choppy trading in the afternoon, as oil prices slid on uncertainty over whether US president Donald Trump would withdraw from the Iran nuclear deal.

Trading on the Iseq index was light as markets resumed after the May bank holiday. The index closed up 1.1 per cent, with most of its stocks finishing higher. Bank of Ireland rose 2.5 per cent to €7.30, recovering some of the ground lost in a weak finish to last week.

Ferries operator ICG rose 0.9 per cent to €5.66. Share advisory firm ISS has recommended that its shareholders reject the company’s remuneration report due to a “continued lack of disclosure” on annual bonus awards.

Baked goods group Aryzta climbed 7 per cent to €19 on its Dublin listing, but the volume of shares traded was low.

Dealmaking dominated activity in UK stocks, with gains for Shire and Virgin Money, although the FTSE 100 index held steady after a public holiday and ended flat.

Shire rose 4.6 per cent after Takeda Pharmaceutical said it agreed to buy the group for £45.3 billion (€51.7 billion).

Shares in Virgin Money jumped nearly 10 per cent after the British bank said it had received an all-share takeover offer by rival CYBG, valuing it at about £1.6 billion (€1.8 billion). CYBG, which owns Clydesdale and Yorkshire Bank, also rose, by 1.1 per cent.

Shares in other mid-sized lenders Metro Bank and Onesavings Bank were lifted by the sign of long-awaited consolidation among Britain’s so-called challenger banks.

However, shares in Sky fell 1.6 per cent after US cable operator Comcast formally notified the European Commission of its intention to bid for Britain’s pay-TV group, a source told Reuters.

The pan-European Stoxx 600 index ended 0.1 per cent higher after spending most of the day in negative territory.

Italy’s FTSE MIB closed 1.6 per cent lower amid worries about political turmoil in the euro zone’s third-largest economy. Italian banks took the most off the index, losing 2.1 per cent. State-controlled oil major Eni was down 2.6 per cent.

In Germany, the Dax slipped 0.3 per cent, while France’s Cac 40 finished down almost 0.2 per cent.

Earnings also missed forecasts at staffing group Adecco, and its shares fell 5.1 per cent. Unilever, however, advanced 1.8 per cent as it announced a €6 billion share buyback.

Wall Street stocks were lower for most of the morning before sharply paring losses, amid conflicting reports about whether Trump would withdraw Washington from the Iran nuclear deal.

The move was eventually confirmed shortly after 1pm New York time, with Trump expected to announce he will reimpose all US sanctions that were waived under the terms of the 2015 nuclear agreement.

Among stocks, Citigroup rose 3.4 per cent after activist investor ValueAct invested $1.2 billion in the bank, citing its low risk and reliable revenue.

Comcast fell 4.8 per cent after Reuters reported the cable operator is preparing to make an all-cash offer for media assets that 21st Century Fox has agreed to sell to Disney for $52 billion.

Disney, which is due to report its results after markets close, was down 1.4 per cent. – Bloomberg / Reuters