Iseq overall index falls 0.77% with Dalata, Bank of Ireland and AIB among the losers 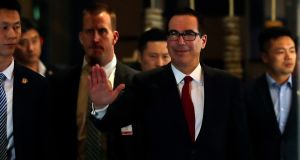 US treasury secretary Steven Mnuchin arriving at a hotel after meeting with Chinese officials in Beijing on Thursday. Photograph: AP Photo/Andy Wong

Lingering concerns about the outcome of US-China trade talks and the potential for rising interest rates in the US troubled global investors on Thursday with major US indices falling 1 per cent.

Declines in Europe were more muted with the Iseq underperforming the wider Stoxx 600 index which fell 0.75 per cent.

The Iseq overall index fell 0.77 per cent on Thursday with Bank of Ireland and hotel group Dalata among the losers.

Meanwhile, Dalata, which held its annual general meeting on Thursday, fell 3.11 per cent to €6.55 despite a positive trading update. However, it had a positive day on Wednesday and Dublin traders suggested it was pulling back on the previous day’s success.

Kerry Group also issued a trading update on the day saying it grew business volumes by 3.7 per cent in the first quarter. The company reached the top of the Iseq 20 on the day, up 0.93 per cent to €86.55.

After a torrid day on Wednesday, Irish bookmaker Paddy Power Betfair regained some ground to end positively on its London listing, however, in Dublin it fell 0.26 per cent to €77.45.

London’s FTSE 100 had a strong start to the day on the back of a positive outlook from miner Glencore before falling 0.54 by the close.

Shares in Smith & Nephew were on track for their worst day in nine years, down 7 per cent after Europe’s biggest artificial hip and knee maker downgraded its revenue and profit forecasts following a weak first quarter.

Go Ahead Group tumbled 11.21 per cent after Deutsche Bank downgraded the stock to “hold” from “buy”, saying that in the absence of future rail franchise wins it is no longer clear the shares are significantly undervalued.

The pan-European Stoxx 600 index fell 0.75 per cent on the day with negative moves for Adidas and Bpost.

Bpost, the Belgian post group, fell 13.07 per cent after its first quarter earnings before interest, taxes, depreciation and amortisation missed consensus forecasts by 16 per cent. The company said it faced higher costs for its new Brussels sorting centre.

Fashion company Adidas fell 6.81 per cent after comments from rapper Kanye West, who designs the company’s Yeezy shoe models. The company did, however, report better-than-expected first quarter earnings but said sales were hit by the strength of the euro.

On the other side of the index, Logitech increased 6.5 per cent after releasing earnings described by Kepler Cheuvreux analyst Torsten Sauter as “a formidable release with growth surprises across the board and where it matters”.

A high-level US delegation arrived in Beijing on Thursday for a two-day talk on tariffs. However, a breakthrough was viewed as highly unlikely, especially as the US embassy said the delegation would leave as early as Friday evening.

Tesla shares fell after chief executive Elon Musk cut off analysts asking about the company’s profit potential, despite promises that production of the troubled Model 3 electric car was on track.