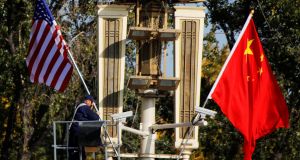 Apparently worsening trade relations between the US and China is having an impact on big US tech players. Photograph: Damir Sagolj/Reuters

Reports that US president Donald Trump is planning a new 10 per cent tariff on $200 billion (€171 billion) worth of Chinese goods, and expectations that Beijing would retaliate, caused a choppy session on Monday. Irish and broad European shares, however, ended up on the day while the UK was broadly unchanged.

In the US, a slide in Apple and Amazon led the S&P 500 and Nasdaq indexes lower.

The Irish Stock Exchange had a muted day of trading on Monday, with gains for Smurfit Kappa and Ryanair, while the benchmark Iseq overall index edged up 0.46 per cent.

Paper and packing group Smurfit Kappa topped the Iseq on the first day of the trading week, closing up 2.66 per cent to €35.15, albeit with fewer than half a million shares traded.

Low-cost airline Ryanair followed closely, up 2.35 per cent to €13.52. The company also saw below-average volume on a day it was contending with website issues.

The FTSE 100 index closed down 0.03per cent and mid-caps lost just 0.01 per cent. Trade was the chief focus after reports that US president Donald Trump was likely to announce new tariffs on about $200 billion (€171 billion) of Chinese imports.

ITV fell 1.1 per cent, with traders citing a report in the Sunday Times that the commercial broadcaster had entered the bidding for Endemol Shine, the production firm behind TV shows such as Big Brother and MasterChef.

Utilities were led higher by SSE, which rose 3.5 per cent, an increase which comes after its shares fell more than 10 per cent last week after a profit warning.

Vodafone gained 0.4 per cent on an FT report saying its incoming chief executive was considering a sale of mobile masts assets to reduce the company’s £31 billion debt pile.

The pan-European Stoxx 600 reversed early losses to rise 0.1 per cent at the close, while Germany’s Dax, home to large exporters and carmakers, was down 0.2 per cent.

The market was buoyed by strong defensive telecoms and utilities stocks. Cyclicals sectors, which are more sensitive to trade and economic growth, have lagged as the trade war ramped up over the past months.

Forecast-beating sales from H&M sent the shares up 16.6 per cent, an encouraging result for the world’s second-biggest fashion retailer whose shares are still down a third of their value from a year ago.

Credit Suisse shares rose 0.6 per cent after Swiss regulator Finma said the lender had failed in its duty to combat corruption in cases linked to FIFA and Venezuelan and Brazilian state oil companies.

A July list of products to be covered by the new tariffs included a range of internet technology products, printed circuit boards and other electronics, putting the focus on the impact on big US tech players. The final list of products to be covered was not clear, but the technology sector dropped 0.8 per cent as Apple, which has said the moves could hit a “wide range” of its products, slid 1.8 per cent.

Another area set to be hit by the costs of the tariffs, the consumer discretionary sector, fell 0.76 per cent, the most among the 11 major S&P sectors. Shares in Netflix and Amazon both fell 2.3 per cent. Retailers including Macy’s and Kohl’s also dropped, and the S&P 500 retailers index lost 1.4 per cent. A climb in oil prices on supply concerns ahead of US sanctions on Iran that take effect in November helped shares in major producers. Chevron and Exxon both rose about 0.7 per cent, boosting the Dow Industrials and pulling the energy sector index higher.